Our Lady of Mercy Chapel 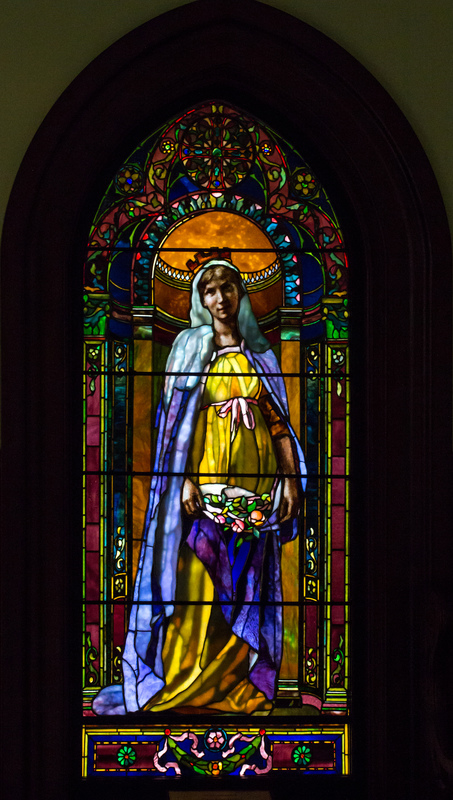 Three large figurative stained glass windows by John La Farge are now housed in a new chapel built on the campus of Salve Regina University in Newport, RI. Our Lady of Mercy Chapel was designed by Robert A.M. Stern, and constructed in 2010, largely to house these impressive windows. The chapel is an elegant modern shingle style edifice that blends well with the existing architecture of Salve Regina University.

The Caldwell sisters were both named Mary to honor their mother, Mary Eliza Breckenridge, and their family’s devout Catholicism. The mother died giving birth to a second child in 1867.[2] The Madonna is therefore at the center of these three windows.

The windows make up a kind of sacra conversazione, a meeting of saints in a spiritual dimension. The left lancet depicts St. Elizabeth of Hungary (1207-1231). St. Elizabeth was known for her works of charity. To thwart her disapproving husband, Elizabeth hid bread under her cloak so he would not see her giving it to the poor. One day he became suspicious and ordered her to open the cloak, but miraculously the bread was turned into roses. St. Elizabeth of Hungary was depicted by a number of artists in the late nineteenth century as an image of ideal charity. Eliza was a family name shared by one of the sisters and their mother, so the choice of Saint was quite appropriate.[3]

The center lancet depicts the Virgin Mary, in a window that copies the famous Sistine Madonna (1508, Dresden) by the High Renaissance artist Raphael. As much as he admired the Pre-Raphaelites, La Farge never shared their disdain for the sensuality and idealized naturalism of the Renaissance artist Raphael. Indeed, he was very sympathetic to the Italian artist’s reconciliation of earthly beauty and spiritual perfection, which he attributed to Raphael’s synthesis of paganism and Christianity.[4] He marveled that he found prints of Raphael’s works “even in Cannibal Land” in the South Seas.[5] La Farge sought to revive the art of stained glass while building on the traditional ideals of art to bring about an American Renaissance.

The right lancet portrays St. John the Evangelist, who resembles the St. John in the Boston College collection window. St. John was the patron saint of John Lancaster Spalding (1840-1916), a priest who co-managed the Caldwell estate and served as a spiritual advisor to the sisters.[6] One of the sisters seems to have had an illicit relationship with this priest for several years, which later led to some scandal when the details came out.[7]

[4] John La Farge, Great Masters: Essays on Michelangelo, Raphael, Rembrandt, Rubens, Velaszquez, Dürer, and Hokusai (New York: McClure, Philips, 1903): 87-88: “The scenes of the Old Testament and those of the New are still in our minds tinged with the classical feeling—semi-pagan—which Raphael chose to clothe them in. I say semi-pagan, to fall in a little with conventional arrangements of thought. The necessary weakness of our grasp of ideas obliges us to catalogue and divide things that really melt one into the other. Of course Paganism, that is to say the habits of the world before Christianity, in the civilization of Greece and Rome, melted into and affected the New Dispensation. Even the forms of the Church are indissolubly connected with those of a Pagan era; as the words of new thought are those of a previous one; as the forms of Greek art were used at once for Christian Types. On this firm foundation is based the naturalness of Raphael's success.”

[5] Ibid., 71-72: “Every one knows something about him, every one has seen something by him. I have seen his Madonnas even in the huts of Cannibal Land. And to make this universal appreciation still more extraordinary, we have the strange fact that any cheap copy of some creation of his which appeals most distinctly to the feeling is sufficient to tell us: here is a separate creation, dependent upon something in it, so that its actual form may be insufficient, but its life persists far into the merest suggestion of what the original was. Such is the extraordinary life belonging to many of his invented people—a life such as belongs to some few statues of the Greeks.”