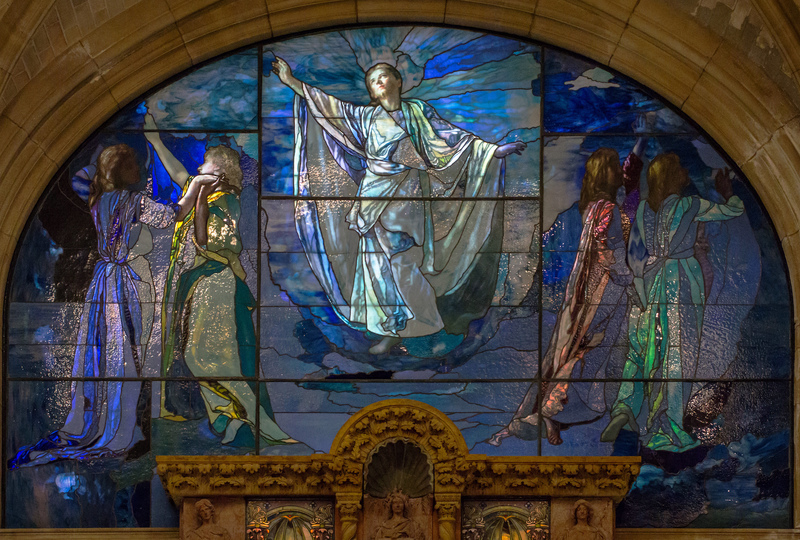 The First Church, Congregational in Methuen, MA is an imposing English Gothic church with a tall crenellated stone tower at the entrance. It was designed by C. Willis Damon (1850-1916), and built 1855/1882. Damon was an architect in Haverhill, MA and one of the earliest graduates of the architecture program at M.I.T. The chancel of this church was redesigned by Christopher Grant La Farge, of Heins and La Farge, to accommodate the new stained glass window by John La Farge which was installed in 1895.

By the 1890s, La Farge was able to achieve a superb amount of control and illusionism with his stained glass windows. This large window incorporated at least eight thousand pieces of glass. It depicts The Resurrection, and was a memorial dedicated to Colonel Henry Coffin Nevins. It was created from 1893-1894, and installed in 1895. La Farge commented on the challenge this work presented:

In a large window which I am completing this coming week, and which is some eleven feet high by seventeen feet wide, I have been obliged to spend a great deal of time in designing the shapes of the many thousands of pieces of glass of which it is composed. The design of the lead-lines alone represent a good many weeks [of work] for they haven’t only to fit the anatomy, if I may so say, of the figures and their dresses, the forms of variations of clouds, etc. but they must also fit very exactly the thousands of modulations of color which I make in my color design,—the two patterns must fit completely, one into the other, and at the same time the sense of a study of abstract line must be strongly felt even as when in the great part of the window it is felt in a depth of color. The number of pieces of glass confined within these leads must in this window be at least eight thousands.[1]

James Yarnall has compared these later works to the illusionism of contemporary European academic painting.[2] The rendering of the flesh tones is almost photographic, and the variety of subtle shades of the opalescent glass is extraordinary.

In addition to The Resurrection window, there are two small decorative windows by La Farge at the front of the church.