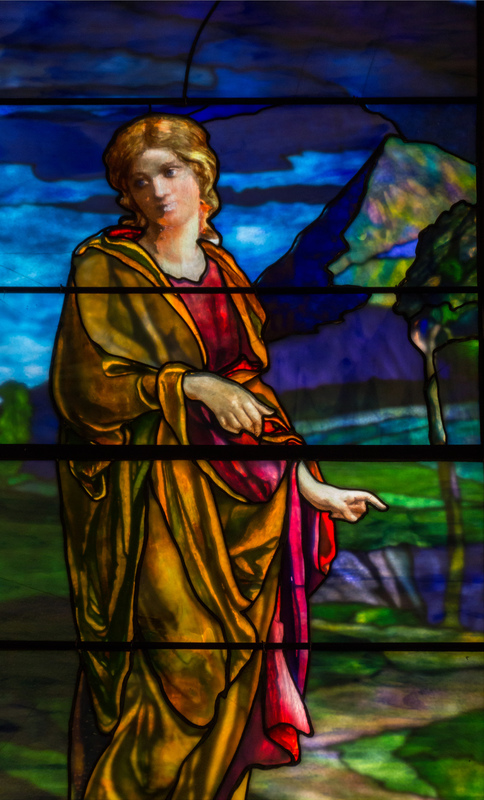 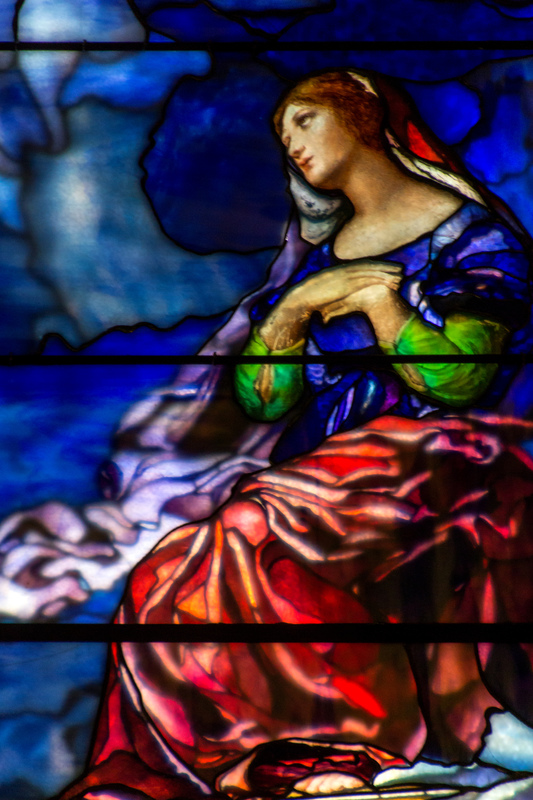 The Houghton Chapel at Wellesley College was designed by George Lewis Heins and Christopher Grant La Farge. Heins and La Farge were prominent architects of religious structures in New England. Heins was John La Farge’s brother-in-law, and Christopher Grant La Farge was the eldest son of John La Farge. The chapel is an elegant Gothic structure with smooth ashlar masonry of a light honey color, and was erected between 1897-99. The interior is enriched with many stained glass windows and a handsome timber-vaulted ceiling.

John La Farge executed two windows for this chapel, memorials to Helen A. Shafer, a former president of the college (1888-1894), and Angie Lacey Peck, a former student. The window for Helen A. Shafer was presented by the class of 1891. It depicts a woman standing in a landscape with a mountain in the distance. She points down to the true path to be followed, an allegory of virtue. An inscription at the bottom of the window reads “The path of the just is as the shining light that shineth more and more unto the perfect day” (Proverbs VI: 1). The phrase Semite Certe was La Farge’s preferred title, and it comes from classical literature, a satire by Juvenal.[1]

The Angie Lacey Peck Memorial Window was presented by the class of 1890. Peck (1866-1891) had been their class president, but died very young. The subject of the memorial is Poetess on the Ivory Tower. The window portrays a woman seated atop a round classical temple, looking heavenward from her interrupted writing. The class of 1890 referred to this subject as “Poetic Contemplation.”[2] James Yarnall observed that the figure is derived from a painting by Paolo Veronese in the Ducal Palace in Venice.[3] A panel at the bottom contains the dedication text.

James Yarnall notes that these two windows were originally on the south wall of the chapel, but were moved in 1936 to the north wall, which receives much less direct light.[4]