The Ascension. Given by Rufus and Maria Field Howard in memory of their daughter Henriette. Two lancets. 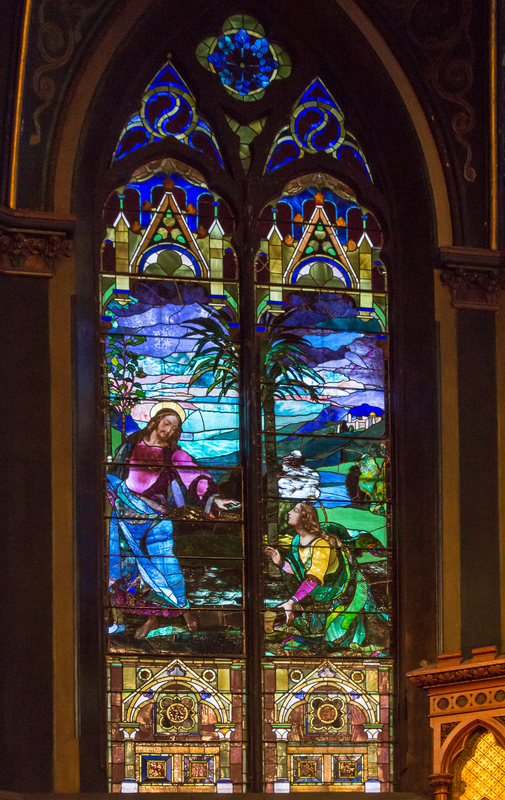 The Resurrection, or Noli Me Tangere. Based on a painting by Lorenzo di Credi. Given by Charlotte Sherman Watson in memory of her husband, Stephen van Rensselaer Watson. Two lancets. 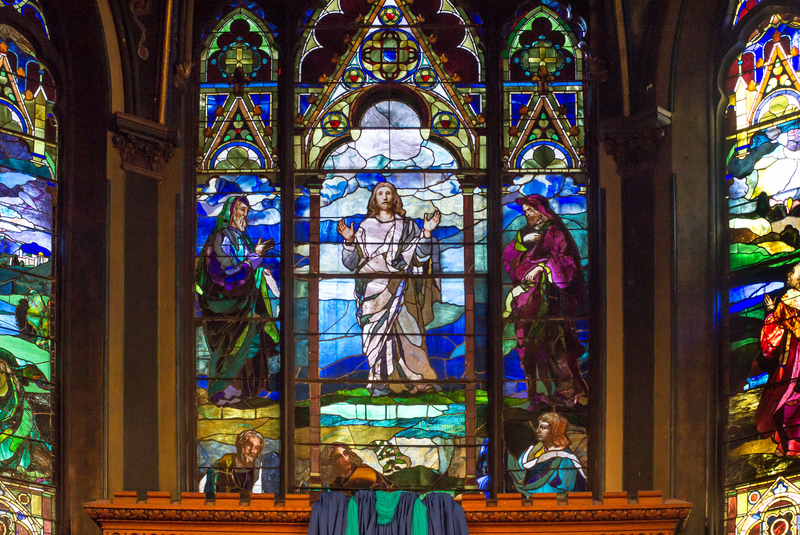 The Transfiguration. Adapted from a painting by Giovanni Bellini. Given in memory of Edward Ingersoll, a rectory of Trinity Church 1844-1874, by the congregation. Three lancets. 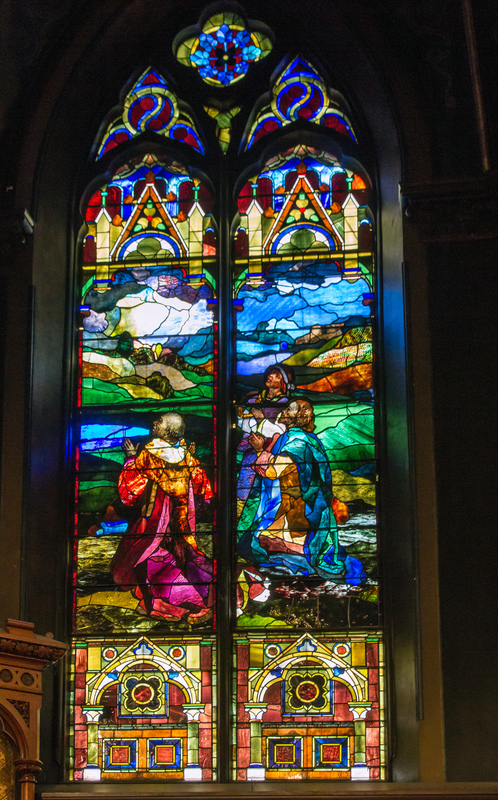 Epiphany. Given by Mary Laverack in memory of her parents. Two lancets. 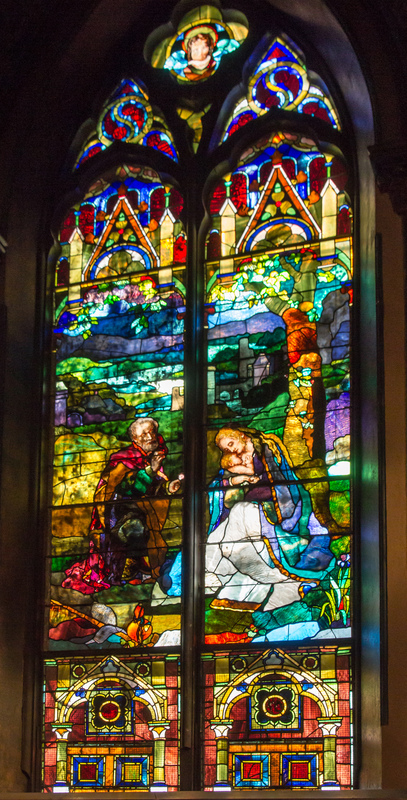 The Rest on the Flight to Egypt. Given in memory of Mary Penfield White and Dr. James Platt White, by their adopted son and his wife. Two lancets. 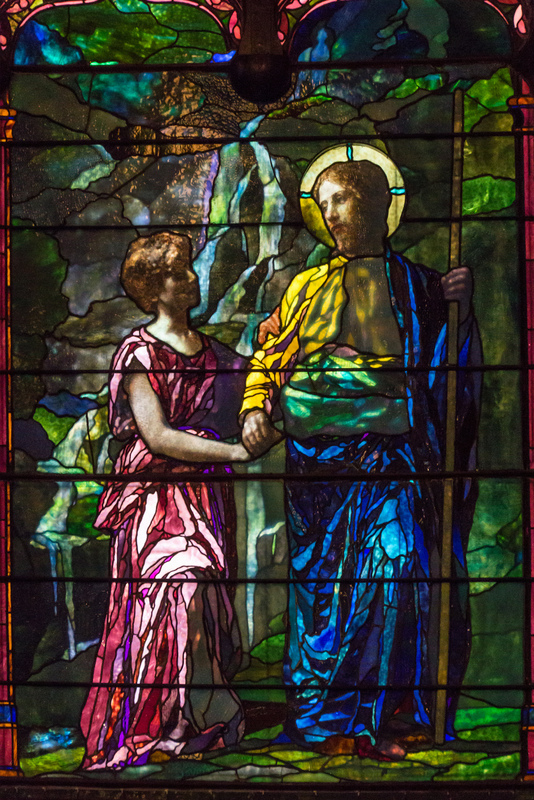 The Lord is My Shepherd, 1890. Side chapel. Based on a painting by La Farge. Commissioned by the family of Sarah Mercer Hazard. 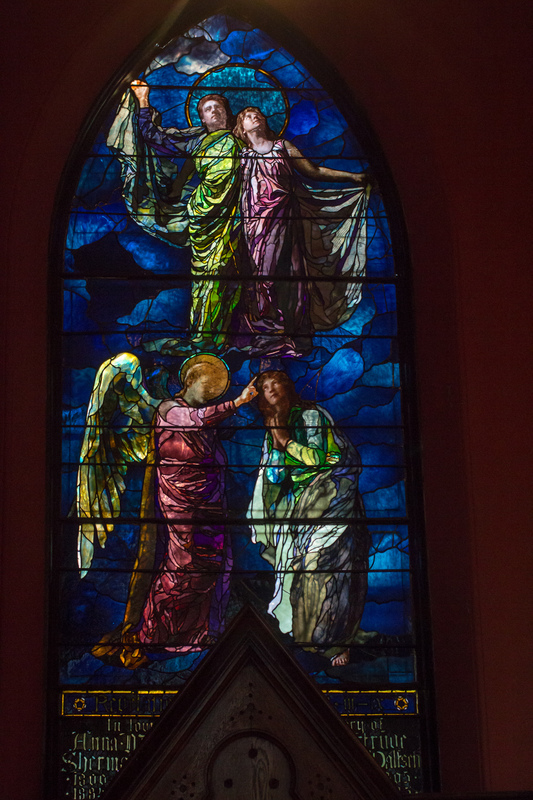 The Sealing of the Twelve Tribes, 1889. Side chapel. Commissioned by Charlotte Sherman Watson in memory of her mother and aunt.

The Good Samaritan, 1889. North wall. Given by the friends of Dr. Thomas Rochester. 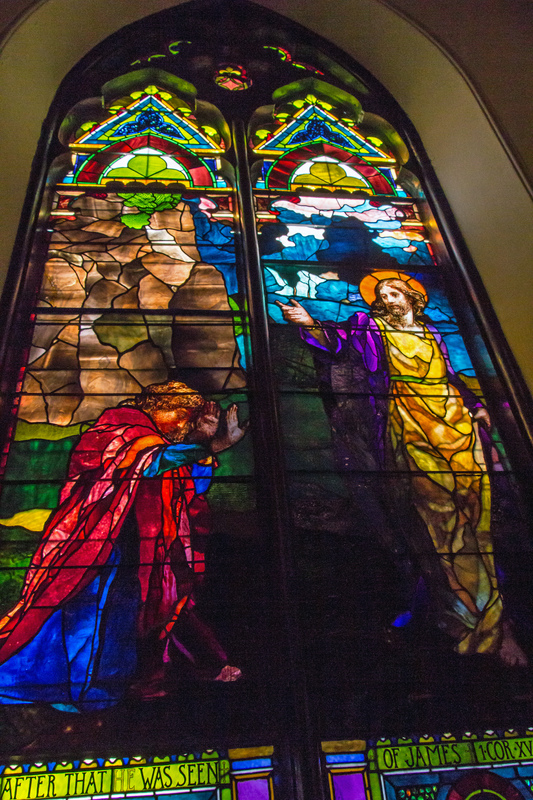 Christ Appears to his brother James, 1887. South wall. Given by Mary Pearce Harrison in Memory of her husband, James Cooke Harrison. Two lancets. 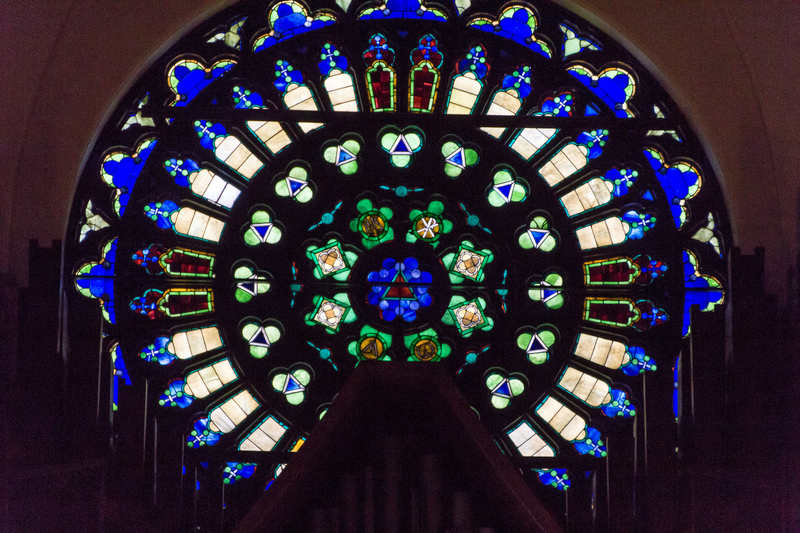 Trinity Church in Buffalo has one of the richest collections of stained glass windows by John La Farge. The architect of the main church was Cyrus Porter, and it was built between 1884-86. It is a dignified Gothic design, with a prominent rose window and a large square tower to the left of the façade. The interior is large, with a high ceiling and exposed wooden trusses. La Farge created a suite of windows for the chancel, two important  windows for a side chapel, two windows in the nave, and the rose  window for the west façade between 1886-90.

The chancel windows depict scenes from the life of Christ, from the nativity to the resurrection. Each composition is based on a different painting from the Renaissance, making the chancel a gallery of fine art as well as a focus for devotion. La Farge’s Ascension window is adapted from a painting of the same subject by Andrea Mantegna (1460-64, Uffizi Gallery, Florence).  The window depicting the Resurrection, or Noli Me Tangere is based on a painting by Lorenzo di Credi (ca. 1520-40, Cenacolo di Fuligno, Florence). The Transfiguration window, composed of three lancets in the center of the chancel, was adapted from a painting by Giovanni Bellini (1480, Museo di Capodimonte, Naples). The window depicting the Epiphany was copied from the right panel of the Bladelin Altarpiece by Rogier van der Weyden (1445-50, Gemäldegalerie, Berlin). The Rest on the Flight to Egypt was adapted from a painting by an unidentified northern artist. The windows are necessarily stylized and simplified representations of these classic paintings, due to the nature of the glass medium. The richness of color invigorates the Renaissance compositions.

The most celebrated window by La Farge in Trinity Church is The Sealing of the Twelve Tribes in a side chapel to the left of the chancel. In 1889, La Farge received high honors from the French government for this work at the International Exposition in Paris. The Sealing of the Twelve Tribes was shown with twenty other examples of La Farge's glasswork in the section of the official catalogue entitled “Artistic Stained Glass.” La Farge received a first-class medal and the ribbon of the Legion of Honor. Being of French descent, La Farge regarded this as the highest honor of his career. The jury citation praised him as “the great innovator, the inventor of opaline glass. He has created in all its details an art unknown before, an entirely new industry…”[1]

It was also reported that the French government tried to buy The Sealing of the Twelve Tribes, but the original patron would not sell.[2] Indeed, the patron was reluctant to have it travel to Paris, and even offered to increase the price if were to be sent directly to Buffalo, but La Farge insisted:

This design pleases me. It seems to me one of my happiest, and unless I can send it to Paris I could not consent to build this window for you at any price. Because, you see, I shall feel it was almost lost in your church in Bufland. I want to show it in Paris where it would be seen and judged by men who have given their lives to knowing something about art …. the men who know most about pictures and sculpture and glass in all the modern world.[3]

The Sealing of the Twelve Tribes was commissioned by Charlotte Sherman Van Renssalaer Watson in memory of her mother Anna Margaret Van Dalfsen Sherman and her aunt, Gertrude Van Dalfsen. The scene depicts event in the Book of Revelation where an angel sealed 144,000 servants of God. Only four figures are used to represent this scene – two souls ascending to heaven, and below them, an angel touches the forehead of a woman to “seal” her. The angel was based on Bancel La Farge, and the woman has the features of Mary Whitney. The faces were painted by Juliet Hanson, and the window was crafted by Thomas Wright, one of La Farge’s favorite glass workers. La Farge acknowledged his contribution; the base panel of the window was inscribed “John La Farge with help of Thomas Wright”.

A nearby window in this side chapel is also by La Farge, and is titled The Lord is My Shepherd. It was based on a painting by La Farge, and dates to 1890. The window was commissioned by the family of Sarah Mercer Hazard. Illustrating the 23rd Psalm, La Farge shows Christ leading a woman by the hand in front of a waterfall toward still waters.

One window in the north wall of the nave depicts the story of the Good Samaritan, a memorial for Dr. Thomas Rochester in 1889. This window looks like two lancets with the figures spilling over from one window to another. The window was actually made without a center mullion, but a wood frame was added to match the other windows. This frame overlaps and obscures the men and the donkey. Two panels at the bottom show charitable acts. A water color sketch for this window in the Museum of Fine Arts, Boston, shows that La Farge conceived of the windows as a continuous narrative which spanned two lancets.

On the south wall of the nave a window depicts the moment when Christ Appears to his brother James, dating from 1887.  This window was given by Mary Pearce Harrison in Memory of her husband, James Cooke Harrison. The window is richly colored with La Farge’s multi-layered plating of glass, and use of opalescent glass.

The rose window, high in the entrance façade, dates from 1886. A triangle is at the center of the window, and other cruciform designs and triangles suggestive of the Trinity radiate outward. Shades of blue, green and milky opalescent white glass dominate the composition. The window was donated by the Ladies Aid Society of Trinity Church.