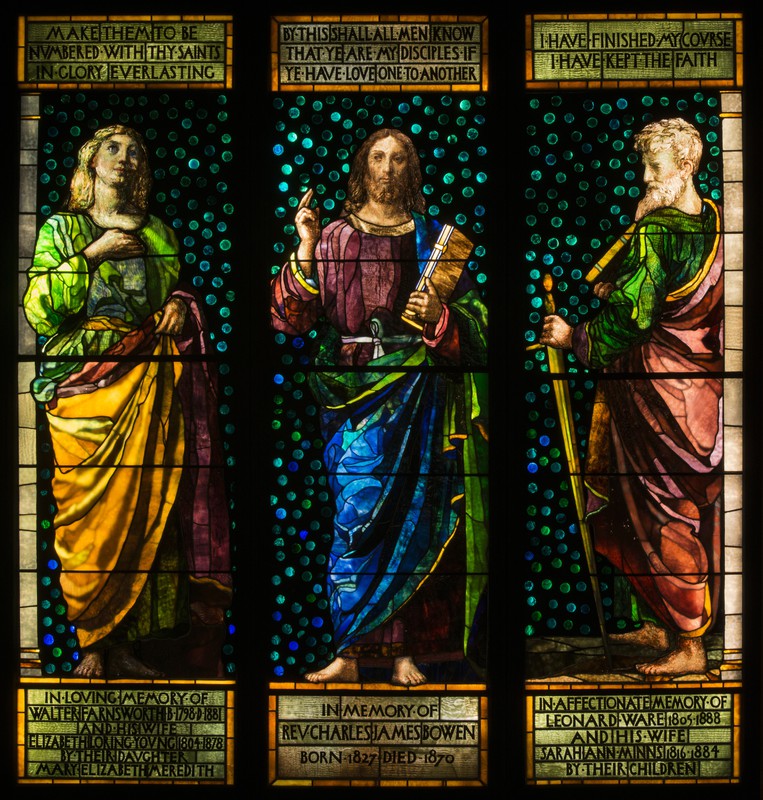 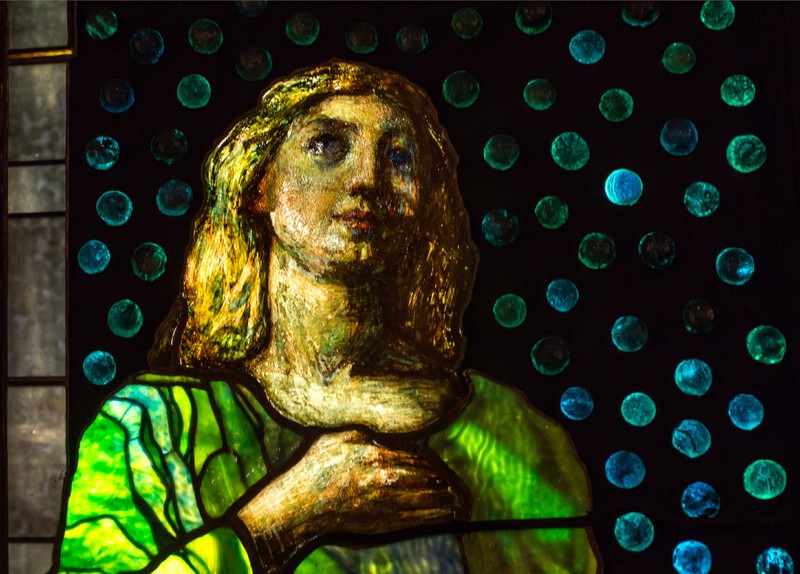 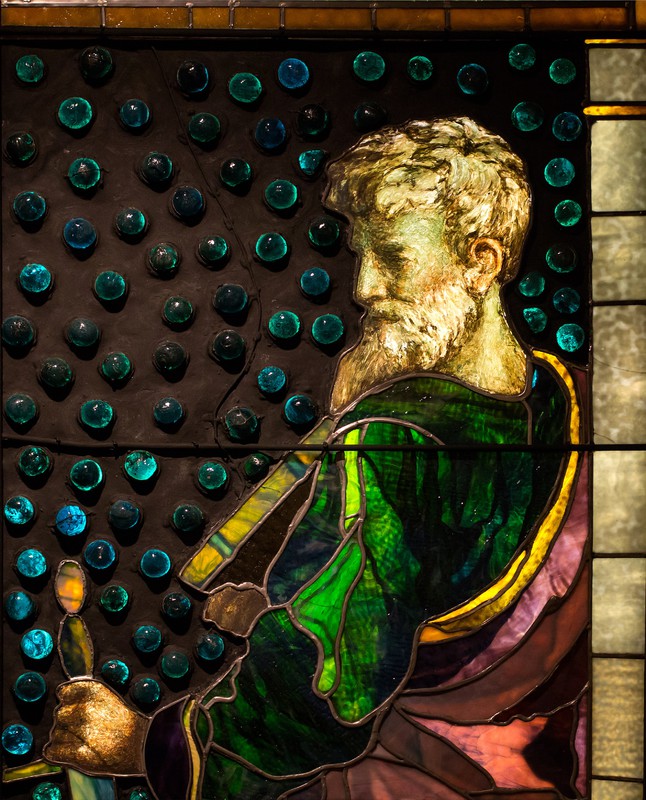 Three large stained glass windows by John La Farge were recently donated to the McMullen Museum at Boston College by William Vareika (BC ’74) and his wife Alison. Vareika has long been a champion of La Farge, and has saved a number of the artist’s windows from dispersal, including a group of windows now installed in a new chapel designed by Robert A.M. Stern at Salve Regina University in Newport, Rhode Island. The gift to Boston College was presented in 2013 in commemoration of the 150th anniversary of the founding of the university. The windows represent Christ Preaching, St. John, and St. Paul. Together they exemplify the gospel of Christ and its dissemination to the Jews and Gentiles. St. John represented the mission to the Jews, and St. Paul was known for preaching to the Gentiles.

The triptych was originally created for the All Souls Unitarian Church in Roxbury, MA in 1889, the same year La Farge was awarded the French Medal of the Legion of Honor for his contribution to art. These windows remained in the apse wall of this church until 1923; they were removed at the time that the congregation merged with the First Church of Roxbury. This church is now the home of the Charles Street African Methodist Episcopal Church. It is a fine example of early English Gothic designed by J. Williams Beal.

In 1925 the minister of the Unitarian Meetinghouse in Amherst, MA appealed to the American Unitarian Association in Boston for financial help in repairing the meetinghouse. No funds were forthcoming, but the minister was offered these three windows to inspire his congregation.[1] The windows were relocated to the meetinghouse and remained in place on the rear wall of the building until 2013, when they were removed to allow expansion of the meetinghouse building. This is a fine example of an Arts and Crafts style house of worship, designed by Loring & Phipps of Boston and constructed between 1892 and 1893. In 2013 the windows were acquired by William Vareika.[2]

These are all memorial windows created for members of the original All Souls Unitarian Church. The one depicting Christ Preaching is dedicated to the memory of the Rev. Charles James Bowen; it was paid for with funds collected from friends of the Roxbury parish. Born in Rhode Island in 1827, Bowen served Unitarian churches in Massachusetts and Maryland, and also was a Chaplain in an army hospital during the Civil War. He was minister of Mt. Pleasant Church in Roxbury from 1865 until his death in 1870. All Soul’s Unitarian Church was the continuation of Mt. Pleasant Church.

The figure of Christ is very similar to the window of Christ in Majesty on the west façade of Trinity Church in Boston from 1883. Unlike the figure in Trinity Church, however, this image of Christ has no halo, in consideration of the Unitarian clients who avoided such overt symbolism of divinity. Both figures are modeled on the statue of Christ known as the “Beau Dieu” (handsome God) on the portal at Amiens Cathedral in France. Although it has been suggested that Rev. Philips Brooks proposed the use of the Beau Dieu for La Farge’s design, Virginia Raguin notes that this figure was one of the staple images of Christ in the nineteenth century.[3] The top panel has the text from John 13:35: “By this shall all men know that ye are my disciples if ye have love to one another.” Christ uttered these words after the last supper, saying “A new commandment I give unto you, that ye love one another as I have loved you…”

The faces, hands, and feet of all three figures are painted onto the glass. This part of the project was often assigned to Juliette Hanson, one of La Farge's key employees. La Farge mentions that in his practice only the “flesh” of a window was commonly painted with enamel on glass, which was then fired to bind the pigment: “With us painting was dispensed with, and the work became a form of translucent mosaic held together by lead instead of cement. Only the heads, hands, faces—what the trade calls flesh—still continued to be painted, especially because with them expression, and element of design and not of color, would always be the principal aim.”[4] Blue cabochons surround the figures. Although a few of these were missing, they have been restored.

The window depicting John the Evangelist was commissioned by Mary Elizabeth Meredith in memory of her parents. The top panel is inscribed with a phrase from the ancient hymn Te Deum laudamus (“Thee, O God, we praise”): “Make them to be numbered with thy saints in glory everlasting.” This traditional hymn is used in Catholic as well as Protestant liturgies. The message is appropriate for the dedication to the memory of family members, and the bottom panel reads: “In loving memory of Walter Farnsworth b. 1798 d. 1881 and his wife Elizabeth Loring Young 1804-1878 by their daughter Mary Elizabeth Meredith.”

The model for St. John was Mary Whitney, John La Farge’s long-time mistress and one of his favorite models until 1892, when she left New York. She starts to appear in windows in the early 1880s. There is a fine watercolor study for this window in a private collection and one in the Museum of Fine Arts, Boston. John, the beloved disciple, was often depicted with feminine features, from Leonardo da Vinci’s famous Last Supper (1495) onward.

In contrast to the gentler image of St. John, the St. Paul window depicts a militant saint, standing erect with a long sword in his hand. The panel at the top of the window contains the inscription from Second Timothy, chapter four, verse seven: “I have finished my course. I have kept the faith.” The preceding line reads: “I have fought a good fight,” which explains the presence of the sword. The following line contains the promise of resurrection: “Henceforth there is laid up for a crown of righteousness, which the Lord, the righteous judge, shall give me at that day: and not to me only, but unto all them also that love his appearing.” The gospels of John and Paul were among the most frequently depicted by La Farge in both paintings and memorial windows. The bottom panel contains the dedication: “In affectionate memory of Leonard Ware (1805-1888) and his wife, Sarah Ann Minns (1816-1884) by their children.”

Both the figures of St. John and St. Paul are based on those in Raphael’s painting of The Ecstasy of St. Cecilia of 1516.[5] As much as he admired aspects of the Pre-Raphaelites, he always respected the Italian High Renaissance artist. Raphael’s painting was copied in stained glass by Louis Comfort Tiffany in 1887 for a window in Trinity Church, Buffalo. La Farge was to create some of his finest windows for this church beginning in 1889, and it is not unlikely that Tiffany’s use of the Raphael image stimulated La Farge to borrow aspects of it himself for the windows now at Boston College. Tiffany reversed Raphael’s composition, suggesting that he was working from a print rather than a photograph of the painting. La Farge also uses this reversed orientation of St. Paul.

The conjunction of these three figures is not random; they are united in a timeless grouping known as a “sacred conversation,” based on precedents in Renaissance art. La Farge wrote:

Perhaps the most celebrated of the ideal arrangements that we know under the name of Sacred Conversations is Raphael’s Saint Cecilia. With the “Madonnas” whom he has represented in the meaning of the Great Lady Patroness surrounded by a court of worshippers, or beings influenced by her, the Madonna and the Child are so immeasurably important that we do not at once classify these great paintings as belonging to the simpler idea of a meeting of people outside of Time.[6]

In this act of artistic appropriation, La Farge seeks to lose himself in the imitation of traditional art in the fundamentally spiritual act of devotional repetition. As with Raphael himself, and other Renaissance artists who emulated antiquity, and Baroque artists such as Rubens who emulated both classical and Renaissance artists, La Farge is creating a representation of a representation.[7] In his stained glass windows, La Farge often sought to reproduce classic works of art. His imitations were motivated by a desire to represent major cultural artifacts for the audience in the United States who did not have easy access to the originals, or even good copies in many cases. Spreading the artistic culture that he was privileged to know so well was one of his chief goals. As early as 1885, Anna Bowman Dodd perceived the idealistic and didactic intent of La Farge's decorative work:

He believes he is doing more for his Art, his country, his fellowman by leading the people through a love for color and illuminated figures to a right appreciation of the true principles and aims of Art, than he could by producing serious easel pictures; that here is a medium Americans of the nineteenth century can understand; that in a new country … where churches and large buildings are springing up on every side, here is the artist's opportunity to sow the good seed, to teach the people, the common people, by means of the most beautiful color and fine decoration, the alphabet of Art.[8]

[2] As William Vareika explained in 2013: “I learned of the availability of the Boston College windows last fall,” says Vareika. “We bought them from the Unitarian Universalist Society of Amherst, Massachusetts, where they had hung in their church since the 1920s. The Amherst Society voted to sell the windows for four reasons: the Christian symbolism was determined to be inappropriate for Unitarianism; the windows needed costly restoration; church building expansion was required and funds were required for construction; and the only place to expand the building was through the wall where the windows were installed.” Interview in “A Homecoming for La Farge,” Event Preview for the Boston International Fine Arts Show, 106.

[5] I thank Virginia Raguin for reminding me of this work.