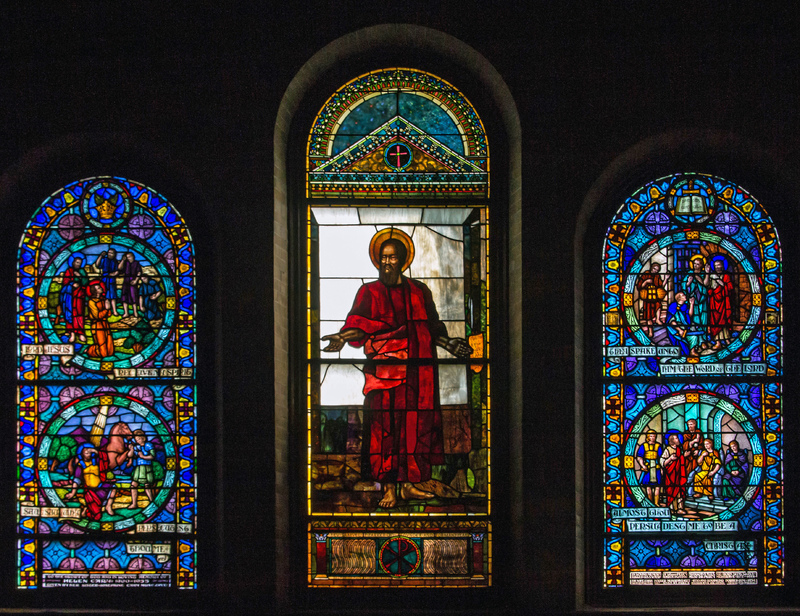 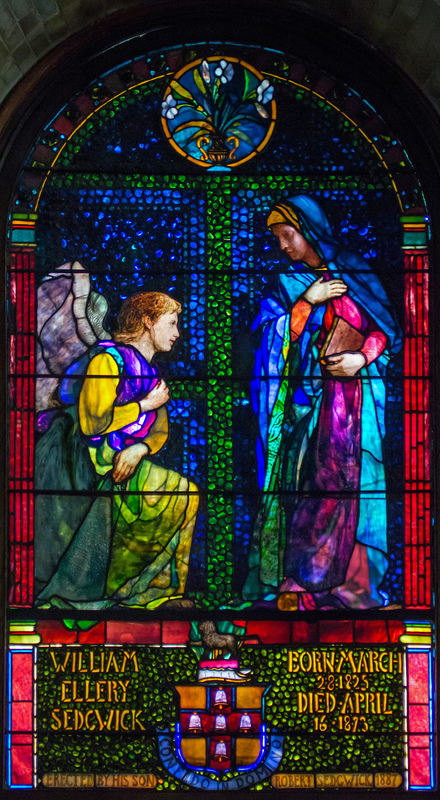 Saint Paul’s Episcopal Church (1883-84) in Stockbridge, Massachusetts was designed by McKim, Mead and White. The stone church is an impressive example of early medieval style, with a spacious interior under a timber-framed ceiling.

John La Farge created a memorial window for the first rector of the church, Reverend Samuel P. Parker in 1884. It is installed in the apse of the church above the altar. The window depicts St. Paul Preaching at Athens, standing with open arms on the Acropolis. The figure of St. Paul is derived from early Christian and Byzantine sources, and reproduces an important lost painting by La Farge. In 1862 he a painted a large (eight by five feet) canvas of this scene for his friend Father Isaac Thomas Hecker, founder of the Congregation of the Missionary Priests of Saint Paul the Apostle, as an altarpiece for its original church.  The canvas was never installed in the Paulist church, and is lost today. In the 1878 auction catalog of his works, the artist described this painting as "the most important canvas I have painted."[1] Only pencil sketches and this version in stained glass remain. The painting was sold to Harry Payne Whitney in 1884, the year that this window was created.[2] At some point later it disappeared.

The transposition of the image to stained glass brought an intensification of color; commenting on the window at the time of the installation in 1884, a critic wrote:

The work appears even better in glass than on canvas, being richer in color. It will be remembered that Saint Paul stands under a linen shelter, caught back by a rope, and that there is the effect of sunlight passing through the linen; This subtlety is very happily transferred to the window by a careful selection of pieces of opalescent glass which give the effect.[3]

The white cloth behind St. Paul was a classic example of La Farge’s use of opalescent glass. Portions of the window have been damaged by overzealous restoration, however, and appear flatter today. The panel below the saint is shaped like a small sarcophagus, with a Chi-Rho symbol in the center, flanked by Roman strigil patterns and small columns.

A second window by La Farge is found on the south wall of the church. Depicting The Annunciation in an Italian Renaissance style, it is a memorial to William Ellery Sedgwick. It was completed in 1887.

Saint Paul’s Episcopal Church is itself a work of art, and is enriched with beautiful windows by Tiffany and others as well as these works by La Farge.

[2] Ibid., 34, n. 29; Henry La Farge, notes that: “The painting was first exhibited at the Philadelphia Centennial. Then, following  the Peirce exhibition in 1878, it was on view at the Metropolitan Museum of Art in 1880-1881, and the Konigliche Glaspalaste, Munich, in 1883. Finally, in 1884, at Ortgies & Co., New York (catalogue no. 44), it was shown under title:" St. Paul. This, the most important picture of Mr. La Farge, is offered for sale, damaged, but it is supposed that the injury is one that can easily be repaired." The canvas was bought by Harry Payne Whitney for $650. In that same year it had served as model for the stained-glass window in St Paul's Church, Stockbridge, Massachusetts. The painting has since disappeared.”