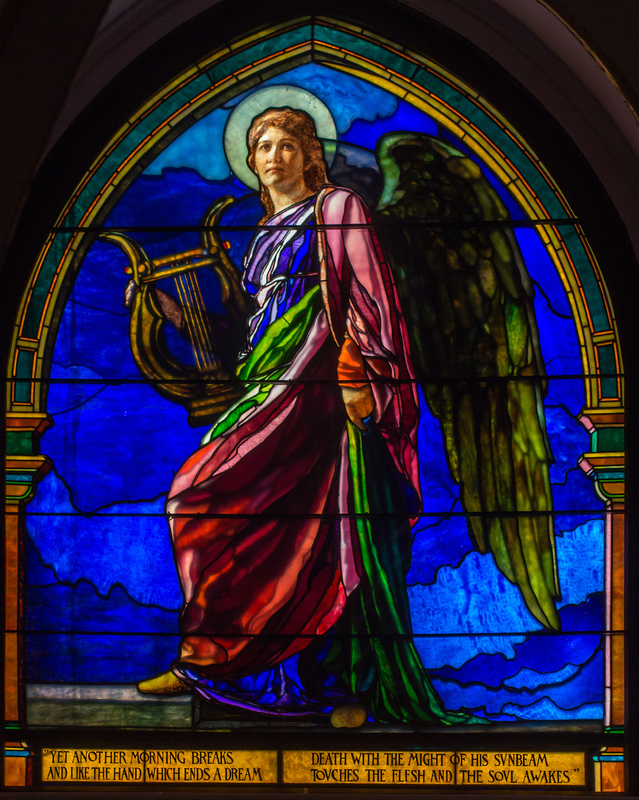 The Angel Holding a Lyre (or The Harpist), Memorial window for Katherine Wallen Lyon, 1896-97

Emmanuel Episcopal Church in West Roxbury, MA, was designed by Rev. Herman Gaylord Wood in 1893. Wood was born in upstate New York, and was self-taught as an architect. He built several churches in Buffalo, Cleveland, Minnesota, and Massachusetts. In the late 1870s, Wood became an adherent of the numerological theories of Charles Piazzi Smyth, who believed that sacred mysteries were inscribed in the measurements of the Great Pyramid of Egypt.[1] This church is a conventional English Gothic style parish church, with a very high ceiling in the nave, distinguished by large timber scissor trusses.

The La Farge window in Emmanuel Episcopal Church was dedicated as a memorial for Katherine Wallen Lyon, and depicts an angel holding a lyre. The colors  in this window are very rich, with the reds, greens and purples of the angel’s robe standing out against the variegated blue background. This window was created in 1896-97, and is also known as The Harpist. A text panel in the glass at the bottom of the window is inscribed with lines from a popular poem of the era by Robert Browning, “The Flight of the Duchess” (1845):

Yet another morning breaks

Touches the flesh and the soul awakes.

There is a watercolor study for this window in the Museum of Fine Arts, Boston.