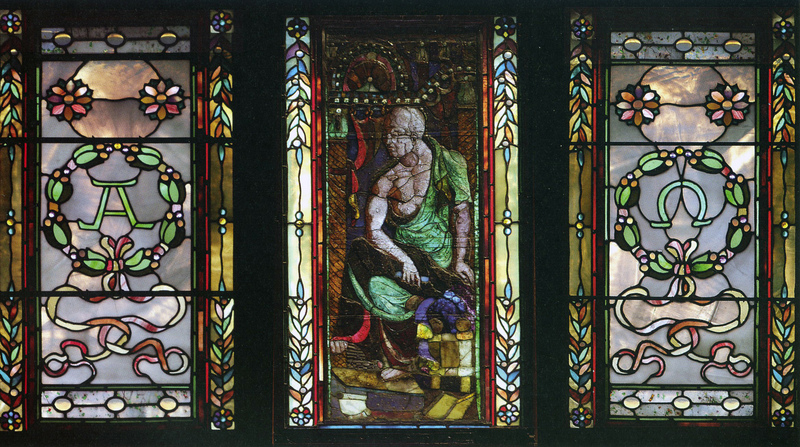 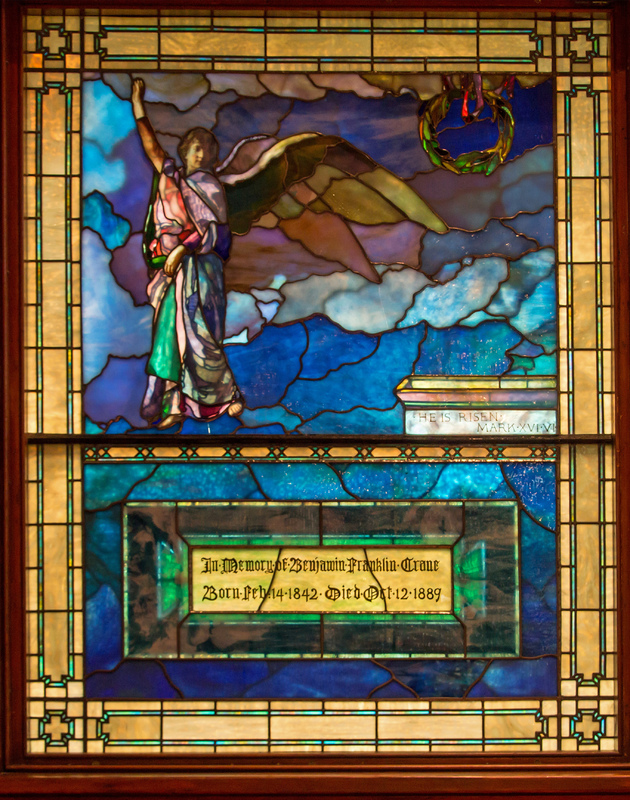 The Angel at the Tomb, Benjamin Franklin Crane Memorial window, 1890

The Crane Memorial Library in Quincy was donated by Albert Crane in honor of his father, Thomas Crane. The library was designed by the noted architect, Henry Hobson Richardson (1838-1886), and built in his distinctive modern Romanesque style.  La Farge had worked with him previously at Trinity Church in Boston (1872-77).

La Farge received a commission for a memorial window for Thomas Crane in 1880; it was installed in 1882. The subject is The Old Philosopher, depicted in the central window, which is flanked by two panels of opalescent glass with the Greek letters Alpha and Omega, signifying the beginning and the end. The figure of the philosopher is modeled on an ivory diptych from the sixth century in the cathedral museum in Monza, Italy. La Farge owned a plaster cast of this sculpture, and a photograph of it as well.[1] For the central window, La Farge tried to avoid the use of the traditional lead lines which held the pieces of glass together. He experimented with a painstaking cloisonné technique, with the pieces of glass fused together with melted foil between them. The Old Philosopher was his first success with this technique. There are seven pieces of glass in the ear alone and a total of about a thousand pieces in the window overall. Mary Gay Humphreys praised it in 1883:

The most wonderful work in glass yet done by Mr. La Farge is the head of an old man reading, in the Crane Library, at Quincy, Mass. One thousand pieces are used in this by actual count, and as many more uncounted, the greater number so small that they had to be handled with pincers. These pieces were united by nine fusings, each at a certain risk. This piece of glass is undoubtedly unique, and its proper place would be in some great museum. On some points not carefully guarded a little paint was required to satisfy minute criticism. But the work demonstrates a hitherto unknown possibility of art in glass.[2]

James Yarnall notes that “La Farge considered this his most successful effort in producing pictorial glass without using paint. The cloisonné process, however, turned out to be too expensive and taxing for the artist to use routinely.”[3]

A second La Farge window, a memorial to Benjamin Franklin Crane,  is found at the left of the fireplace. It was originally located on an exterior window, but was moved later. The subject is The Angel at the Tomb, an image of the empty tomb of Jesus after the resurrection. The inscription, from the gospel of Mark, reads “He is risen.” This window is a beautiful example of La Farge’s use of opalescent glass and plating to create rich colors. La Farge received the commission for the window through his friend Henry Adams. Adams’ brother, Charles Francis Adams Jr., was chairman of the library’s trustees at the time.[4] It was completed in 1890.

[3] Yarnall, John La Farge, A Biographical and Critical Study, 103. This cloisonné technique was also used for the Peacock Window now at the Worcester Art Museum. This window took sixteen years to complete, from 1892-1908. The highly experimental window was purchased directly from the artist by the museum. The peacock motif was typical of the Aesthetic movement in the late nineteenth century, and was ultimately inspired by Japanese art. The tall vertical format recalls Japanese kakemono scrolls.