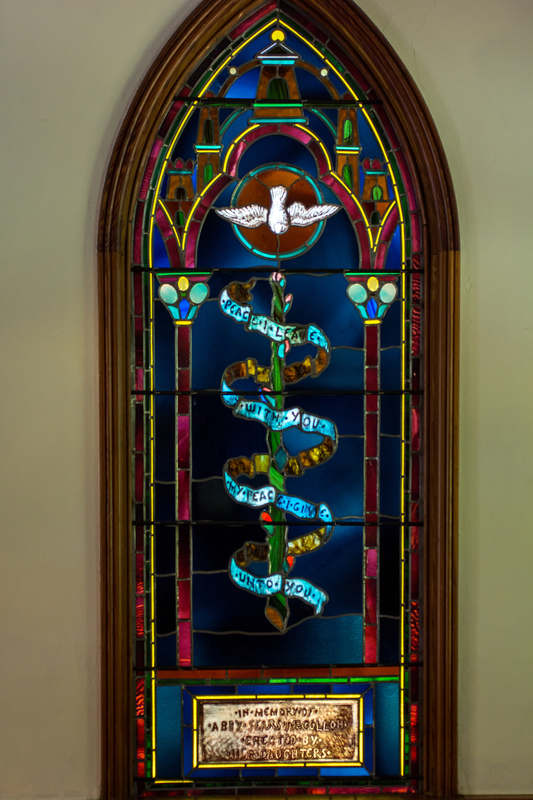 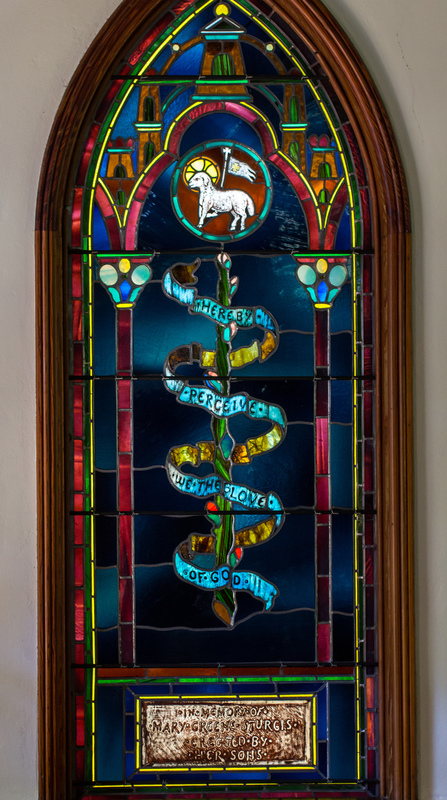 Emmanuel Church was founded by Major Russell Sturgis, Jr., who donated the land upon which it was built. The structure was designed by his brother, John Sturgis, a noted architect and a partner in the Boston firm of Sturgis & Brigham. This church was built for the summer residents of Manchester-by-the-Sea, and is still only open from June to August. According to Craig Lentz, a member of the church, “Emmanuel is one of a very few summer seasonal independent churches still remaining.  The Episcopal diocese officially called them a ‘peculiar.’  They existed generally up through the Gilded Age, and in the case of Manchester on the North Shore, many of the summer residents came to manses along the seacoast with their extended families, including clergy.”[1] The Sturgis family was central to this church.[2]

The architectural style of the church is that of an English Rural Gothic chapel, with steep pitched roofs and a lattice of wooden trim giving the effect of half-timbering. The interior has high ceilings marked by dramatic scissor-trusses. Emmanuel Church was consecrated on June 13, 1883.

The simple décor of the interior is enriched by a number of stained glass windows, including three by John La Farge. The La Farge windows are at the rear of the church, and are memorials to prominent members of the congregation. One was given by Miss E.S. Perkins for Mrs. Susan Welles (mother of Susan Welles Sturgis, the first wife of Major Sturgis); one for Mary Greene Sturgis given by her sons; and one for Mrs. Abby Sears McCulloch donated by her daughters. These windows were installed in 1889.[3]

The window for Abby Sears McCulloch depicts a dove of peace descending from the heavens. A banderole unfurls below, with the inscription: “Peace I Leave with You, My Peace I Give unto You” (John 14:27). The scroll is flanked by slender pillars, which support an elaborate architecture fantasy. The Susan Welles memorial window features a Chi-Rho symbol at the top of the lancet, with a lovely inset image of day lilies in the middle. A tablet below reads: “In Thy Presence is Fullness of Joy” (Psalms 16:11). A panel at the bottom notes the dedication to Abby Sears McCulloch by her daughters. The memorial window for Mary Greene Sturgis has a similar layout to the McCulloch window, with framing pillars and an unfurling banner at the center. The upper image is that of the Lamb of God, with a halo and a flag. The text on the banner reads: “Hereby Perceive We the Love of God” (John 3:16). A panel at the bottom contains the dedication to Mary Greene Sturgis by her sons.

[1] Communicated in an email from Craig Lentz, August 5, 2014. I am grateful to Mr. Lentz for his gracious and informative tour of the church.

[2] According to the church web site, Emmanuel Church – History, accessed June 8, 2015: “For over one hundred years, the Church has been administered as a private trust. The indenture provided that the Church and property be vested in three trustees after the death of Major Sturgis. He appointed his sons as successor trustees. When he died in 1899, these sons—William Codman Sturgis, Edward Sturgis, and S. Warren Sturgis—succeeded their father.”

[3] Although the date for these windows is sometimes given as 1899, a note in the London American Register of 1889 described their installation in 1889. London American Register, (June 15, 1889: 7. The newspaper article reported that ““Major Russell Sturgis, of Boston, opened his beautiful chapel at Manchester-by-the-Sea, Mass., May 26th, and himself conducted the services. Four new memorial windows have been placed at the rear and on the side of the church—one to the memory of Major Sturgis’s father, the late Russell Sturgis of London which depicts the story of the Good Samaritan. The three at the rear are to the memories of Susan Welles, Abby Sears McCulloch and Mary Greene. They were all executed by La Farge. A fifth window is already completed, and will be shortly placed by Mr. Preston in memory of his wife, Susan Welles Preston, who died on February 18th 1888. Mrs. Preston was a daughter of Major Sturgis.” The report is in error, however, in saying that all four memorial windows were by La Farge; the Good Samaritan window is signed by H.E. Goodhue Co. of Cambridge, MA, and the Susan Welles Preston window was by Frederic Crowninshield. I thank Roberto Rosa for the identification of the author of the Susan Welles Preston window.