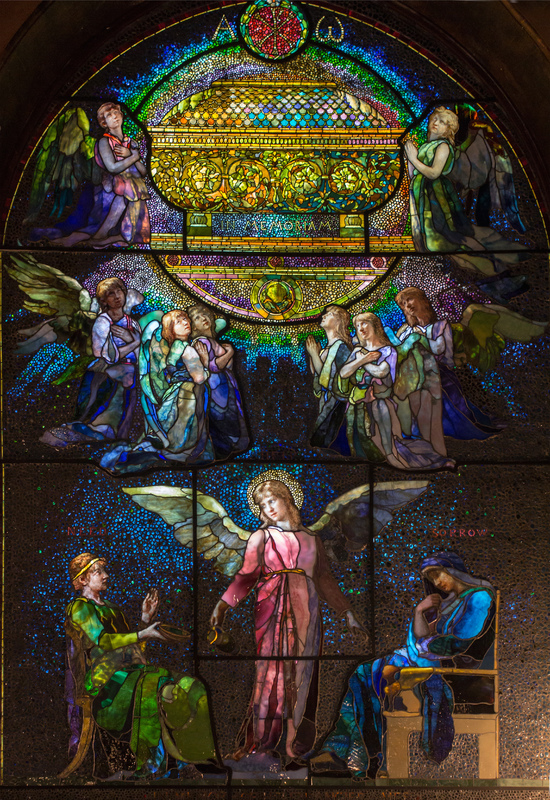 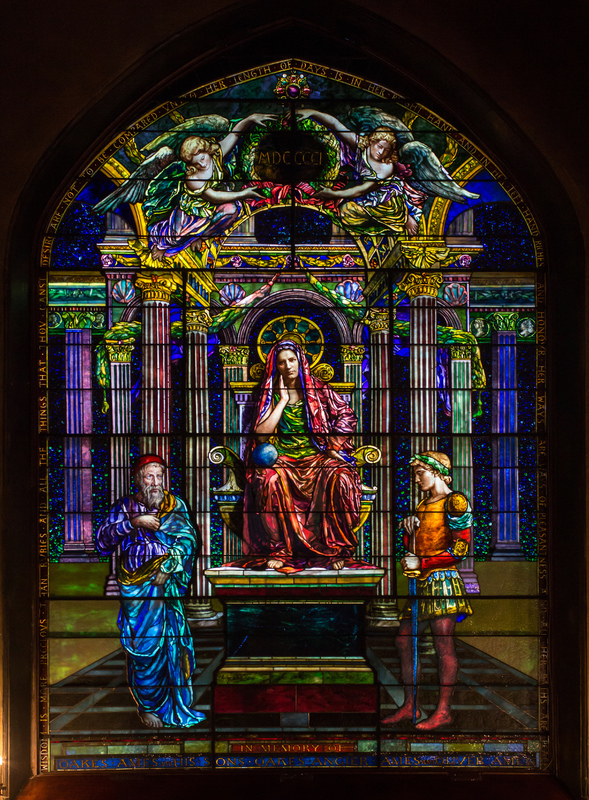 Unity Church in North Easton contains two of the most important windows by John La Farge: the Helen Angier Ames Memorial Window of ca. 1883-87 and the Wisdom window, a memorial to Oakes Ames, Governor Oliver Ames, and Oakes Angier Ames. The Ames family was the leading economic and cultural benefactor of the town of North Easton in the nineteenth century, donating five major buildings by H.H. Richardson, including the Oakes Ames Memorial Town Hall, the Ames Memorial Library, and the railroad station. Unity Church was designed in an English Gothic style by John Ames Mitchell, a nephew of Oliver Ames Jr. in 1875. Mitchell was educated at Harvard University, and studied architecture at the École nationale supérieure des Beaux-Arts in Paris. The interior of the church was remodeled in 1895 by Henry Vaughn, a prominent Gothic Revival architect.

The La Farge windows in Unity Church are among his finest, but they nearly didn’t happen. This was a period of considerable disarray in La Farge’s professional affairs.[1]

He was a skilled and insightful artist, but a poor businessman. Although he was from a wealthy background, he had difficulty managing money. His greatest financial and business blunder occurred in 1884, when he was charged with grand larceny for stealing his own designs from the La Farge Decorative Art Company, which he had established to handle the increasing number of commissions he was receiving.

One near casualty of this dispute with his partners was for The Angel of Help, the Helen Angier Ames Memorial Window at Unity Church in North Easton. The window was first commissioned in 1882 by Frederick Lothrop Ames as a memorial for his sister, Helen Angier Ames. La Farge’s legal troubles with Tiffany and his own firm led to the suspension of the commission. After the legal charges were dismissed in 1885, Frederick Lathrop Ames re-hired La Farge and the window was finished in 1887. It is one of his finest works, utilizing a wide variety of glass and an elegant allegorical design. In the upper tier of the window, adoring angels support a bejeweled casket. Below, the Angel of Help offers comfort to two figures labeled Need and Sorrow. Sorrow, shrouded in blue, sits in a throne with sphinxes on the arms. The Angel of Help and most of the hovering angels supporting the casket in the air bear the features of Mary Whitney, La Farge’s assistant and mistress. La Farge’s watercolor studies for this project are jewel-like in their color.

This small church contains a second large window by La Farge, the Wisdom window. Cousins Oakes Ames and Winthrop Ames commissioned the window in 1901 in memory of their grandfather, Congressman Oakes Ames, and their fathers, Governor Oliver Ames and Oakes Angier Ames. The central figure of wisdom, seated on an elevated throne in an elaborate classical architectural setting, is flanked at the left by an old philosopher who resembles Leonardo da Vinci, and a young soldier at the right. This figure is reminiscent of his first essay in stained glass, the ill-fated commission of 1875 for the window in Memorial Hall at Harvard. A simple inscription that runs around the sides and across the top of the window is taken from Proverbs 3: 15-17: “Wisdom is more precious than rubies, and all the things that thou canst desire are not to be compared unto her. Length of days is in her right hand and in her left hand riches and honour. Her ways are ways of pleasantness, and all her paths are peace.” These two figures are both derived from Italian Renaissance sources. The aged philosopher thus represents the “length of days” and the warrior stands for “riches and honour.” The Wisdom window is signed not only by La Farge, but inscribed “In glass by Thomas Wright.”[2]

La Farge’s favorite glass artisans, Thomas Wright and John Calvin, had left his Decorative Art Company not long after it had been founded. Thus they escaped the chaos of La Farge’s legal troubles. They formed their own Decorative Stained Glass Company and continued to assist in the creation of most of La Farge’s windows. La Farge: “Ever since I was obliged to give up my former establishment in 1884, at which time I had partners, I have had all my work done by a firm consisting of my two best workmen, than whom there are not better workers in glass in the world. I have my own rooms and reserve stock of my own, and these men serve me both as foremen, and as suppliers of such number of men as I may need.”[3]

[1] Julie L. Sloan and James L. Yarnall, “Art of an Opaline Mind: The Stained Glass of John La Farge,” American Art Journal, 24 (nos. 1/2, 1992): 17, summarize the unfortunate developments: “By 1881, burgeoning commissions demanded the expansion of his workshop. To provide working capital, he had to take on a partner in late 1882. A year later, financial problems forced him to take on two more partners and form the La Farge Decorative Art Company. By 1884, disputes with his partners over artistic control had erupted into personal and professional acrimony, ultimately leading to his arrest in May, 1885, on charges of grand larceny. Although the charges ultimately were dismissed, this incident ‘created a decided scandal in both social and art circles and became the general topic of conversation whenever or wherever artists or connoisseurs met.' The scandal rocked La Farge's career, costing him many important commissions.”