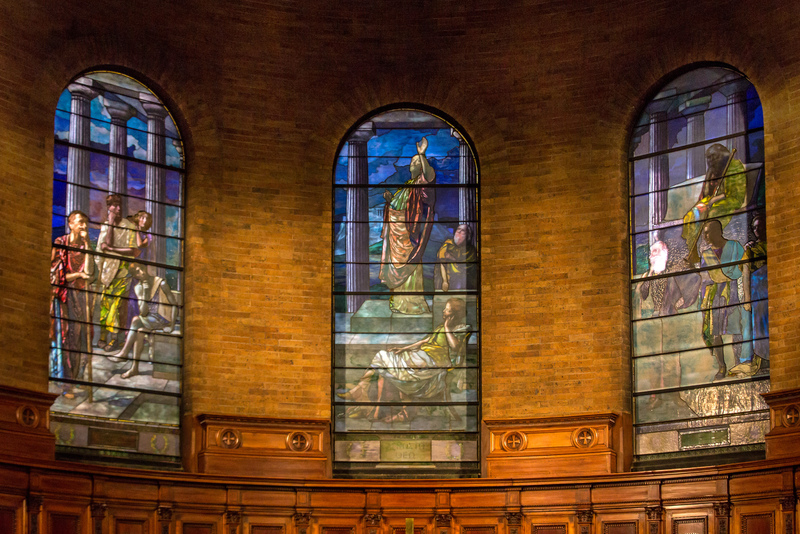 In one of his last stained glass commissions, John La Farge returned to the theme of St. Paul Preaching at Athens, which had been featured in some his earliest religious paintings and a stained glass window for Saint Paul’s Episcopal Church in Stockbridge, MA (1884). La Farge’s windows for St. Paul’s Chapel at Columbia University were installed in 1907. This classical revival building was designed by Isaac Newton Phelps Stokes. Stokes was a prominent New York architect who studied at Harvard and the Ecole des Beaux-Arts in Paris. This chapel has a monumental portico at the entrance and a large central dome.

La Farge’s composition is shown in three large round-arched windows in the apse. The center window shows St. Paul preaching before the acropolis in Athens, with spectators near him and spread across the two flanking windows. The listeners show varying degrees of attention or indifference. Those on the left represent believers, while there are more skeptics in the right window, which features a Greek official on a judge’s seat. All the faces and hands are skillfully painted with the illusionism that characterized La Farge’s late style. The use of opalescent glass and plating gives rich color to the robes and background of the figures, and the details of classical architecture are carefully depicted with accurate perspective. Panels beneath the figures contain inscriptions in Greek; one beneath St. Paul reads “To the unknown God” (from Acts 17:23).[1]