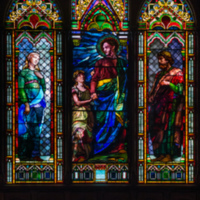 Christ Leading the Soul through the Valley of the Shadow of Death, Richard and Alice Baker Memorial Window, 1879-82. 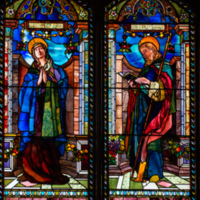 La Farge’s first ecclesiastical memorial commission was for two windows in the Channing Memorial church in Newport, Rhode Island. The architect of the church was Elbridge Boyden (1810-1898) from Worcester, who created a spacious interior in this English Gothic style church, with ample space for glass. These windows were commissioned in 1879 and dedicated in 1881.[1] The Rev. Barnabas Bates window is found in a side wall near the apse of the Gothic Revival church. There is also a fine window of the same date depicting Christ Leading the Soul through the Valley of the Shadow of Death, the Richard and Alice Baker Memorial Window, in the front façade of the church.

Although little known today, Rev. Barnabas Bates was celebrated as the “father of cheap postage,” an honorific derived from his activities as an occasional postmaster and advocate for a standardized national rate of cheap postage as a matter of economic justice and opportunity. Bates succeeded in securing an inexpensive land postage rate of three cents in 1851, and was still campaigning on behalf of cheap overseas postage at the time of his death in 1853.[2] The window of St. Barnabas and the Virgin was given by his daughter and depicts his patron saint, Barnabas, and the Virgin Mary, who was the daughter's patron saint.

Thomas Gaffield, a glass chemist from Boston who attended the dedication of the window commented that “It is so expensive, as the windows are made up of so many little pieces that I do not think any but very rich people or societies will indulge in the luxury of its use.”[3] The window captures the features and achievements of Rev. Bates. St. Barnabas has the face of Rev. Bates, while the Madonna has features of Mary Whitney, La Farge’s studio assistant and mistress. La Farge wrote that artists in any time could not but paint from their experience: “The religious feeling of the religious painters of the past had no other means of expression than the faces of the people they saw about them.”[4]