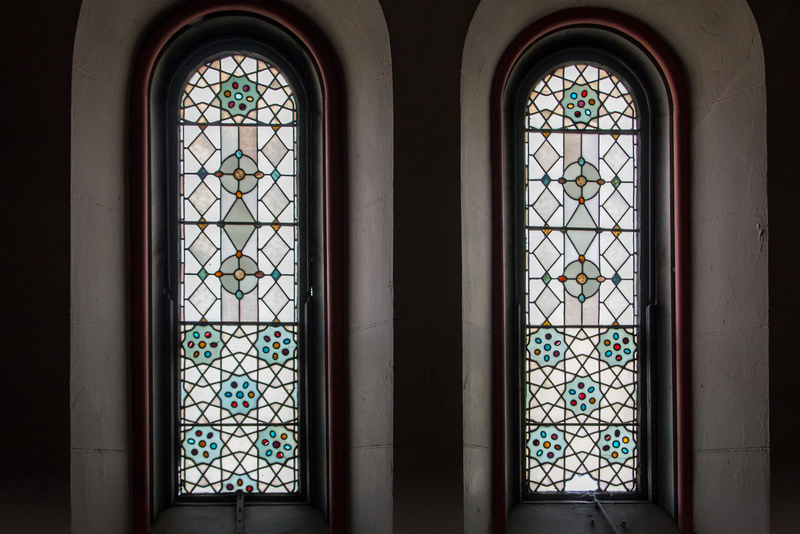 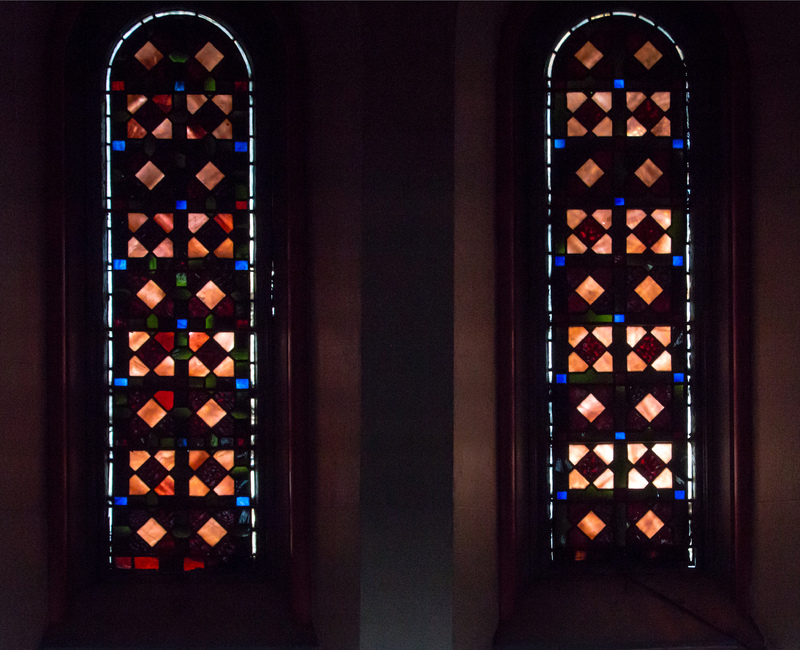 The Newport Congregational church was designed by Joseph C. Wells, and constructed between 1855-57 in an early Romanesque style. Wells was an English-born architect who practiced between 1839-1860 in New York City., and was a founding member of the American Institute of Architects in 1857. This church was painted and fitted with stained glass windows by John La Farge in 1880.

The commission he received in 1879 to completely decorate the Congregational Church in Newport, stipulated that the artist use no figurative or traditionally Christian designs. Therefore, he turned to Islamic sources for his inspiration. Cecelia Waern noted in 1896 that he made his designs: “…paying great attention to a local feeling which opposed ecclesiastical adornments; so that the artistic problem there carried out was that of giving a church effect without recalling any traditional motives or symbolism.”[1] In the late nineteenth century, colonialism was at its peak and there was considerable interest in Islamic art for its antiquity and exoticism.[2] As early as 1856, Owen Jones’ influential compendium The Grammar of Ornament included many Islamic designs.[3] La Farge, like Louis Comfort Tiffany who actually traveled to North Africa and Egypt in 1870, was an admirer of Islamic art.

La Farge created twenty abstract decorative windows which used patterns and colors inspired by churches in Cairo. On the ceilings over the galleries, he painted copies of an Islamic carpet that he had purchased in Boston.[4] The abstract patterns of Islamic art revealed a deep sense of order for La Farge: “…this … plan, which …[is] a sort of grammatical analysis, gives us the Moorish geometric decoration, [and] … a design; that is to say, in the original meaning of the word design, an intention, a purpose, a human arrangement of the present for the future.”[5]

Basing his design on the colors of an Oriental carpet also had practical advantages, as it provided a clear model for his assistants, who had varied artistic talents: “All my men were new, ordinary country workmen. One I find has a good eye for color, while my foreman has no idea of color at all. By taking actually a carpet, the arrangement of which seems to suit the case, I, teaching my man to mix the colors after my methods, get him to judge of the success of different tones by their resemblance to the copy.”[6]

Abstract geometric patterns revealed a deep sense of order for La Farge, and even his ostensibly secular decorative projects represent an intricate sense of design that has spiritual connotations. The wall painting of the apse is particularly striking.