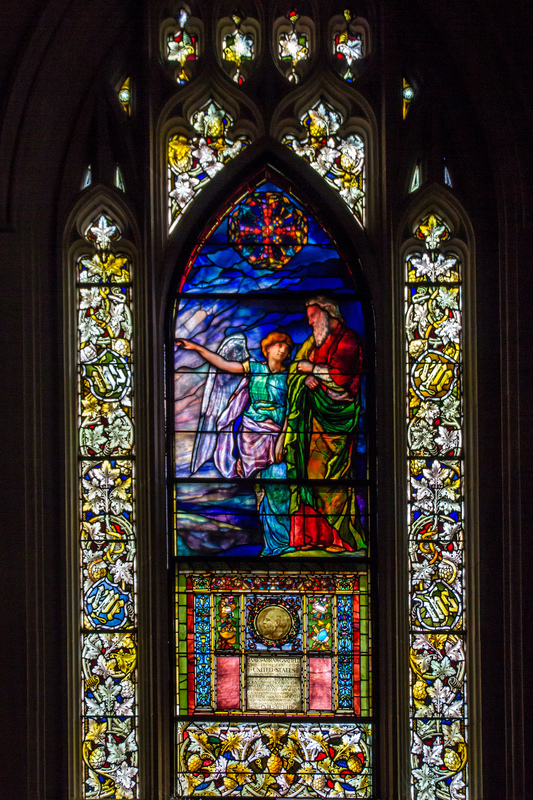 Civic memory is enshrined in La Farge’s commemorative window for James Abram Garfield (1831-1881), the second American president to be assassinated. Garfield served only four months before being shot by a disgruntled Federal job seeker; he was attacked in a train station in Washington, DC. This window of Abraham and an Angel was commissioned for the Williams College Chapel and dedicated in 1882. The window was first installed in the Stone Chapel (1859) across the street and moved to the new Thompson Memorial Chapel in 1905. The English Gothic chapel was designed by Francis R. Allen, an architect who worked in a variety of eclectic styles.[1]

Despite some reservations about the heaviness of the figures, a critic for the New York Times admitted in 1882 that it is “…to Mr. La Farge more than any other is due the eminence that we now hold… in the manufacture of stained glass.” The article continued, “it needs no great strain of fancy to see in the small and great glass work by La Farge…the same range of emotions that reach one through the ears while listening to music by great masters.”[2]

The top portion of La Farge’s window shows an angel pointing to the promised land for the aged Abraham. Below, is a highly detailed painting on glass for the portrait of President Garfield and a long text panel.[3] Portions of the window are extremely beautiful, such as the wing of the angel and the drapery of the figures, but the composition as a whole seems somewhat disjointed between the image of Abraham and the Angel and the memorial portrait of President Garfield. The window is now flanked with thin lancets of modern design added when the window was reinstalled in 1905.

[3] The text reads: "James Abram Garfield twentieth president of the United States, born November 19th, 1831, died September 9th, 1881. In memory of his services to the country,—a scholar, a soldier and statesman, and in token of the universal love and sympathy called forth by his protracted suffering and untimely death, this window was placed in the chapel of his Alma Mater by his friend, Cyrus W. Field."