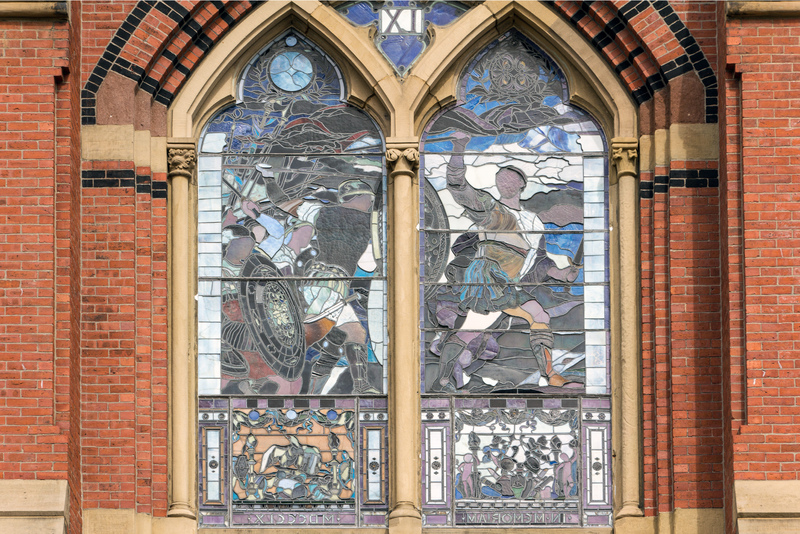 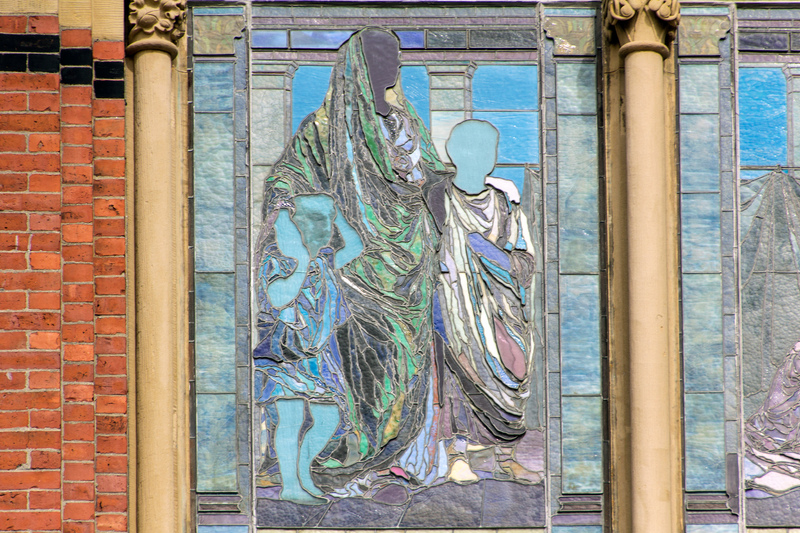 Cornelia, Mother of the Gracchi, 1891

Memorial Hall was constructed from 1871-78 to honor the Harvard alumni who fought for the Union in the Civil War. Funded completely by donations, it represented the largest gift to the university at that time. The architects were William Ware and Henry Van Brunt, who designed it in a striking High Victorian Gothic style. At first glance, it resembles a church, but it was never intended to be one, and incorporates a dining hall, memorial hall, and the Sanders Theater for classes and assemblies.

La Farge’s first essay in stained glass was a window intended for the new Memorial Hall, commissioned by the Class of 1844. He was recommended for the commission by his long-time friends, Ware and Van Brunt.[1] The window was finished in June of 1875, but rejected by the class representatives due to the high cost.[2] The subject was the representation of a medieval knight, based on an armored figure in the Castelfranco Madonna by Giorgione. It was designed by La Farge and executed by Donald MacDonald (1843-1900), a glazier with the Boston firm of William J. McPherson (1821-1900).[3] Although the work was rejected, the McPherson firm exhibited it at the Philadelphia Centennial Exhibition without crediting La Farge as the designer. La Farge had not wanted to exhibit it as he considered it an incomplete effort, and “little more than a botch.”[4] Both European and American critics saw the promise of a new direction for stained glass in this early work, however. The window is lost, demolished by La Farge who was dissatisfied with it, but there is a photograph of a sketch for it at the Boston Public Library.[5]

Despite the frustration of the cancelled project for the Chevalier Bayard window, and the subsequent collapse of negotiations for two windows depicting Sir Philip Sydney and the ancient Greek statesman Epaminondas as memorials for the Class of 1857, La Farge accepted a commission from the class of 1860 for a Battle Window comprised of two lancets for Memorial Hall at Harvard University. The Battle Window was one of La Farge’s most important, if problematic, early commissions.[6] He created the window in his New York studio in 1879, and one lancet was installed, but La Farge was dissatisfied with the effect and had it removed at his own expense.[7] He remade the window with his new skills in opalescent glass, and it was installed in June of 1882. La Farge used a wide variety of materials for his windows; he reminisced that in the Battle Window he: “…used almost every variety of glass that could serve, and even metal, stones, such as amethysts, and the like, … streaked glass, the glass of several colors blended, and a glass wrinkled in to forms, as well as glass …blown in to forms. I also painted the glass very much and … so … this window is an epitome of all the varieties of glass that I have seen used before or since.”[8] La Farge filled the two lancets with one unified composition, disregarding the terms of the commission which called for single figures in each lancet.

The class of 1880 commissioned a window depicting Virgil and Homer; it was installed in 1883. A window depicting Cornelia, Mother of the Gracchi was planned as early as 1875, but not installed until 1891.[9] The subject honors Cornelia, the widow of a Roman general, who responded to a wealthy matron who was boasting of her jewels by pointing to her children, saying “These are my jewels.” The last window installed in Memorial Hall is Athena Tying a Mourning Fillet, a memorial to Cornelius Conway Felton, a former professor of Greek and President of Harvard. It was commissioned in 1898, and installed in 1904.

Memorial Hall contains over one hundred stained glass windows by many well-known artists. These four works by John La Farge are among the most notable, and trace his career from beginning to end.

[7] Sloan and Yarnall, “John La Farge and the Stained-Glass Windows in Memorial Hall at Harvard University,” 647.

[9] Sloan and Yarnall, “John La Farge and the Stained-Glass Windows in Memorial Hall at Harvard University,” 648.