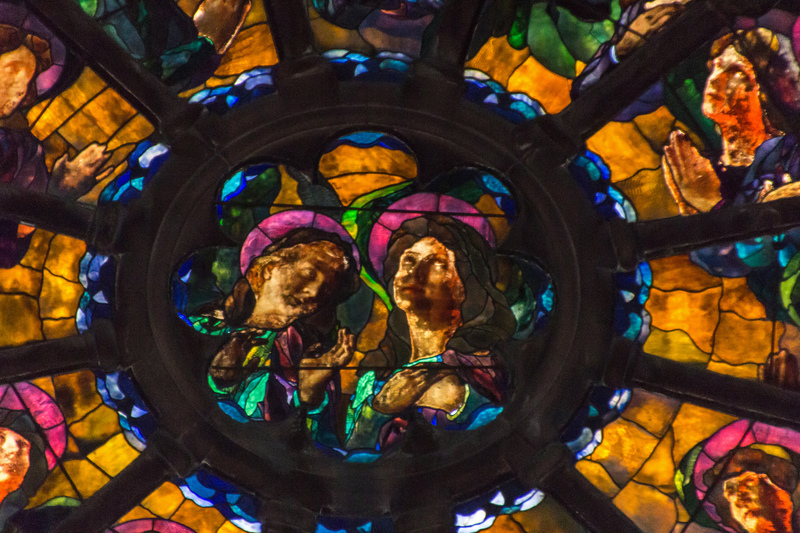 All Saints Cathedral (1888) in Albany, NY, is the fifth largest cathedral in America. It was the first Episcopal Cathedral in the United States, and was designed by Robert Wilson Gibson (1854-1927), who was born in England and studied architecture at the Royal Academy of Arts in London. Gibson moved to America, and won a competition in 1882 to design the All Saints Cathedral in the style of High Gothic cathedrals of Canterbury, Lincoln, and St. Albans.[1] H.H. Richardson was the runner-up for this commission. Construction began in 1884, and continued until 1906.[2] The building is still less than half complete in terms of the initial plans, which called for tall towers at the nave crossing and western facade. The interior is most impressive, with a high vaulted ceiling and all the design features of high Gothic architecture, including stone piers and a clerestory.

John La Farge created a rose window of repeating images of adoring angels in twelve panels that radiate around a central circular shape. The central window depicts two saints:
“one, expressing the deep peace of pardon after penitence, leans her head upon the other, whose upturned brow beams with joy.”[3]

This window was donated by Elizabeth, Lavinia, and Frederica Clarkson and formally recognized on Easter eve, April 11, 1890. The Clarkson family was a major donor to the church, and the red sandstone used in its construction came from Clarkson quarries.[4]