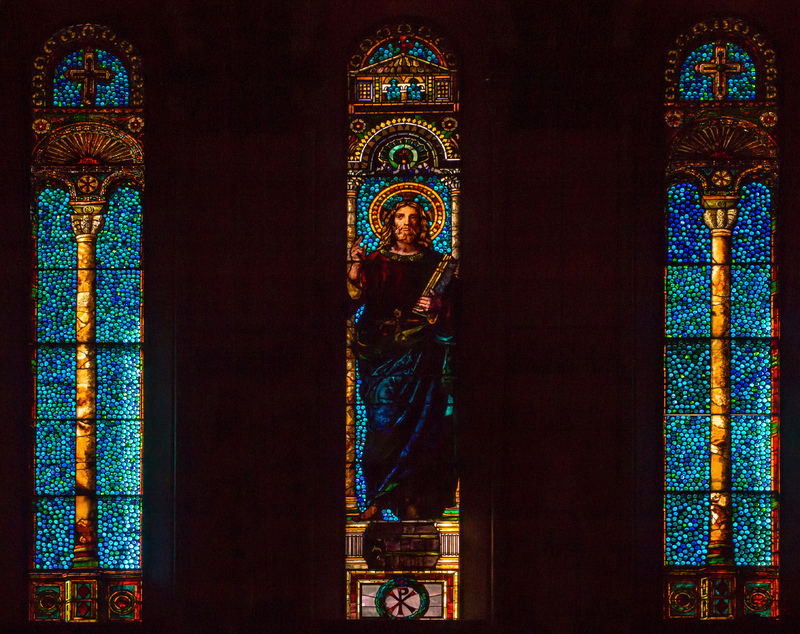 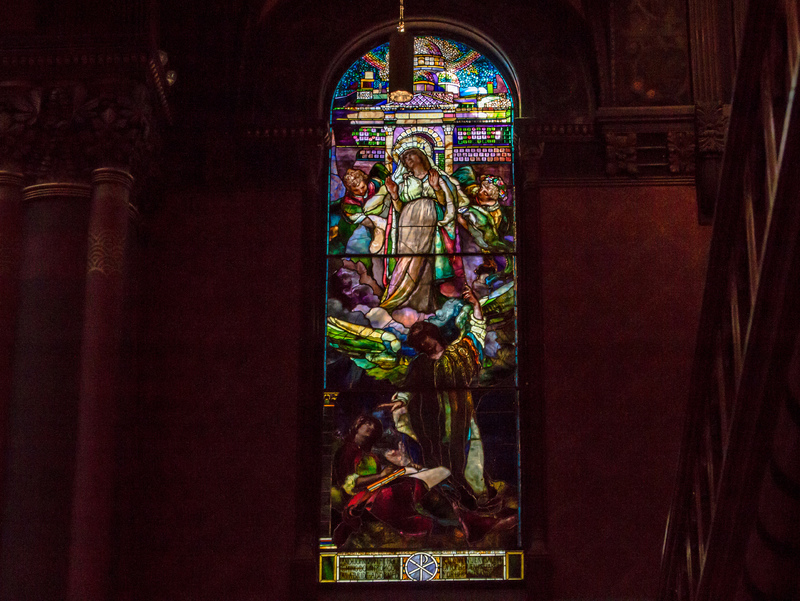 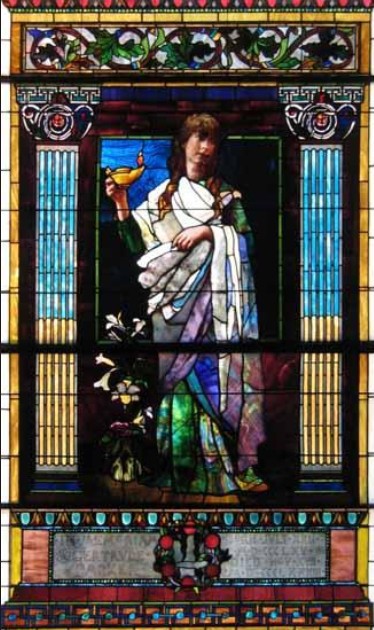 Trinity Church in Boston was the home of one of the largest and most powerful Episcopalian congregations. The building of Trinity Church in Copley Square was a major artistic and cultural achievement in post-Civil War Boston. The church was designed by the greatest architect of the day, Henry Hobson Richardson (1838-1886), and constructed between 1872-1877 on the new land created by the filling of the Back Bay. The style is Richardson’s distinctive modern interpretation of French and Spanish Romanesque sources, and it was immediately hailed as a landmark in American architecture. In 1885, a poll of the readership of the American Architect and Building News declared it the finest building in the United States.[1] It is a perfect example of the principles advocated in John Ruskin’s highly influential The Seven Lamps of Architecture (London: Smith, Elder and co., 1849). These Lamps were as much moral principles as artistic guides, and Trinity Church embodies them all: Sacrifice, Truth, Power, Beauty, Life, Memory, and Obedience. The Lamp of Memory was particularly relevant to La Farge, in that it defined architecture as the material form of the cultural memory of a society.

Although the style is a variant of Romanesque, which is not known for large windows of stained glass, Richardson made the interior as expansive as possible and opened the walls with large windows for stained glass. The architect intended the church interior to be “a color church” from the beginning and in 1876 asked John La Farge to create and execute a decorative scheme for it.[2] The interior decoration featured Richardson’s favorite Pompeiian red, gold, blue, green colors, with figures painted in encaustic (a wax-based pigment) and tempera paint for the walls. Imagery was worked out with Rev. Phillips Brooks, and included only positive images of faith and mission; there are no gloomy last judgments or crucifixions. Nearly all of La Farge’s commissions for church murals or stained glass windows were for Protestant, mostly Episcopalian, churches.

This, La Farge’s first major decorative commission, was accomplished under difficult conditions, and at great speed. To keep costs down and to speed completion for the congregation which had lost their old church in the great Boston fire of November, 1872, La Farge was obliged to finish the painting of the interior while the construction scaffolding was still in place, and so had only a few months to execute all the painting.[3] Royal Cortissoz quoted La Farge’s description of the difficulties of finishing this demanding project:

…painting Trinity Church, my kindly assistants had always to help me up the 30-foot ladder on to the great scaffoldings. …This did not prevent my painting on the wall, slung on a narrow board sixty feet above the floor of the church, with one arm passed around a rope and holding my palette, while the other was passed around the other rope, and I painted on my last figure, eighteen feet high, which had to be finished the next morning at 7 o'clock. I painted five hours that night in that way, and painted for twenty-one hours out of the twenty-four. For a sick man, you can see that the strain was well met, and many times since I have had to go through this physical strain of painting a big picture on the wall from the scaffoldings.[4]

La Farge’s first stained glass window for Trinity Church in Boston is one of his finest. It is a stunning portrayal of Christ in Majesty that was designed to face Phillips Brooks and inspire him as he preached from the pulpit. The central window of Christ with a halo and book is flanked by two windows showing simple columns. The background of all three windows features brilliant blue round nuggets of glass, or cabochons.

The Gothic cathedral was built and experienced as a symbolic image of heaven, as a vision of the Heavenly Jerusalem. There was a great desire in the Middle Ages to be granted a vision of divine reality; in The Gothic Cathedral, Otto von Simson observed that “In the religious life of the twelfth and thirteenth centuries, the desire to behold sacred reality with bodily eyes appears as a dominant motif.” Art could supply a vision of heaven. Von Simson notes that the text of Revelation 21:2-5 was read at the dedication of cathedrals; this text underscores the identification of the cathedral with heaven:[5]

“And I John saw the holy city, new Jerusalem, coming down from God out of heaven, prepared as a bride adorned for her husband.

And I heard a great voice out of heaven saying, Behold, the tabernacle of God is with men, and he will dwell with them, and they shall be his people, and God himself shall be with them, and be their God.”

John La Farge chose this text as the subject of one his most impressive windows in Trinity Church, Boston, the window of Ieposolyma, the New Jerusalem of 1884. It is found in the north transept, and is a jewel-like creation of what La Farge called mosaic glass, with many small pieces of colored glass. The architecture behind the female figure is inspired by Early Christian designs. This window was commissioned by George Nixon Black (1814-80), a Maine lumber baron.

In 1885, La Farge added a large window for the Parish House of Trinity Church in Boston. It depicts The Wise Virgin, from the parable of Christ (Mathew 25: 1-13) which praised her and her sisters for their prudence in keeping their lamps filled with oil in anticipation of the coming of their bridegrooms. It is a widely recognized allegory for the need to be prepared for the Last Judgment. The window was dedicated to the memory of Gertrude Parker. The inscription on the window reads: “Blessed are the Pure in Heart For They Shall See God.”

One of La Farge’s most beautiful memorial windows is that which he created for his friend, the architect Charles Follen McKim. McKim commissioned it as a memorial to his young wife, Julia Amory Appleton (1859-87), who died in childbirth. La Farge finished it in only five months, and it was installed in the nave of the church in 1888. The window depicts a young girl climbing the steps of a temple, symbolizing the entry of Julia McKim into heaven. The figure is adapted from Titian's Presentation of the Virgin in the Academia at Venice (1534-38). Titian’s work was reportedly a favorite painting of the deceased.[6] The artist extracted the small figure of the Virgin ascending the steps to the temple, and made it the center of his composition. At the bottom of the window, is the image of a musician playing a lute, a figure reminiscent of others in Venetian Renaissance paintings. There is a large study for this figure at the Worcester Art Museum.

The last window La Farge made for Trinity Church is found in the north transept, and depicts the Resurrection of Christ (1902). It is modeled on another painting by Titian, The Resurrection (1542-44) in the Palazzo Ducale, Urbino. This large stained glass window was dedicated as the Mary Love Boott Welch Memorial Window.

[6] James L. Yarnall, John La Farge, A Biographical and Critical Study (London and Burlington, VT: Ashgate Press, 2012): 158-159. La Farge worried that he had rushed the window. Writing to Henry Adams, he hedged: “I could not see the window together before sending it-so that that also is a great chance. I know that certain things in it are just contrary to what I drew or made out, but it was too late to alter.”