Church of the Incarnation 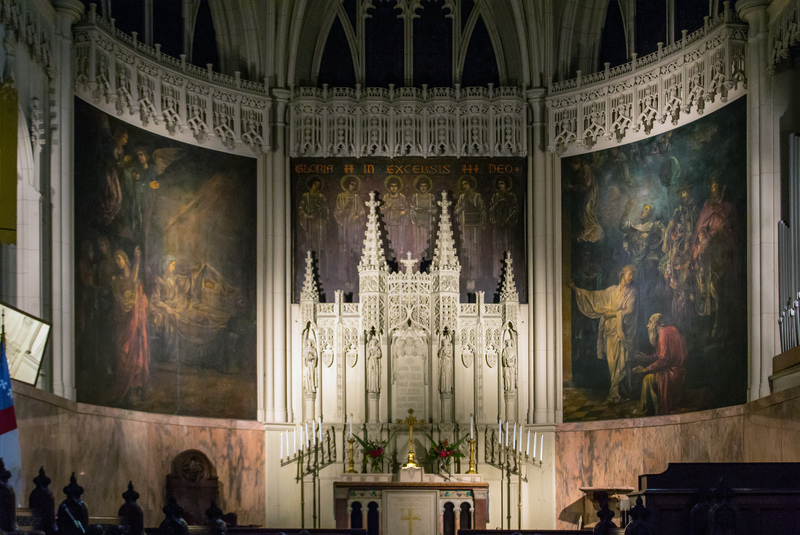 Murals of the Nativity and Adoration of the Magi, 1885-86

The Church of the Incarnation in New York City contains important murals and four windows by John La Farge. The Gothic Revival church was first designed by Emlen T. Littell, and was completed in 1863-64. In 1882, fire destroyed most of it, and the church was rebuilt in 1882 by David Jardine. In 1885, architects George L. Heins and C. Grant La Farge, the painter's eldest son, were hired to redesign the chancel.[1] John La Farge painted large murals flanking the altar, depicting the Nativity and Adoration of the Magi in 1885-86. He also created four stained glass windows for the church in 1883 and 1884. In 1896, the firm of Heins and La Farge completed the spire.

The memorial window for George Whitney Smith (1861-1863) commemorates the death of a child, and is comprised of two pairs of narrow lancets contained in a large pointed arch window frame. It was installed in 1883. The upper pair of lancets features an angel standing above small children playing and embracing, with the inscription “Those that be planted in the House of the Lord / Shall Flourish in the Courts of our God.” The lower pair features the heads of two small angels in two lancets, with crosses and grape vines above the dedicatory inscriptions that give the name and birth and death dates of George Whitney Smith (1860-1863).

A second pair of lancets in a large pointed arch frame serves as a memorial to John Riley (1814-1874). The upper pair of windows depicts Christ calling St. Peter and St. Andrew from their casting of nets, with the inscription “Follow Me and I will Make You Fishers of Men.” Quatrefoils below these lancets are inscribed with the names “Petrus” and “Johannes.” The lower pair of lancets depicts the heads of St. John the Evangelist and St. Peter in quatrefoils framed within decorative patterns, including large panels of rough blue cabochons, the “broken jewels” that La Farge often used. The dedicatory inscriptions to John Riley are contained in additional quatrefoils below these lancets. This memorial window was installed in 1884.[2]