The Other Air Force: U.S. Efforts to Reshape Middle Eastern Media Since 9/11

The Other Air Force: U.S. Efforts to Reshape Middle Eastern Media Since 9/11

As it seeks to win the hearts and minds of citizens in the Muslim world, the United States has poured millions of dollars into local television and radio programming, hoping to generate pro-American currents on Middle Eastern airwaves. However, as this fascinating new book shows, the Middle Eastern media producers who rely on these funds are hardly puppets on an American string, but instead contribute their own political and creative agendas while working within U.S. restrictions.

The Other Air Force gives readers a unique inside look at television and radio production in Afghanistan and the Palestinian territories, from the isolated villages of the Afghan Panjshir Valley to the congested streets of Ramallah. Communications scholar Matt Sienkiewicz explores how the U.S. takes a “soft-psy” approach to its media efforts combining “soft” methods of encouraging entertainment programming, such as adaptations of The Voice and The Apprentice with more militaristic “psy-ops” approaches to information control. Drawing from years of field research and interviews with everyone from millionaire executives to underpaid but ever resourceful cameramen, Sienkiewicz considers the perspectives of the Afghan and Palestinian media workers trying to forge viable broadcasting businesses without straying outside American-set boundaries for acceptable content.

As it carefully examines the interplay of U.S. military and economic might with the capacity for local ingenuity and resistance, the book also analyzes the intriguingly complex programming that emerges from this tension. Combining eyewitness reportage with cutting-edge scholarship, The Other Air Force reveals the remarkable creative output that can emerge even from the world’s tensest conflict zones. 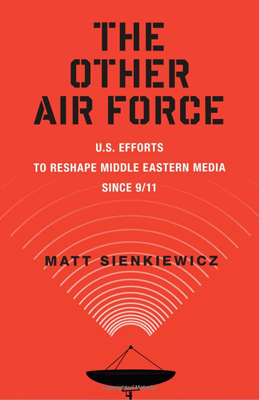