Bill Clinton: New Gilded Age President goes beyond personality and politics to examine the critical issues of the day: economic and fiscal policy, business and financial deregulation, healthcare and welfare reform, and foreign affairs in a postCold War world. But at its heart is Bill Clinton in all his guises: the first baby boomer to reach the White House; the “natural”–the most gifted politician of his generation, but one with an inexplicably careless and self-destructive streak; the “Comeback Kid,” repeatedly overcoming long odds; the survivor, frequently down but never out; and, with Hillary Rodham Clinton, part of the most controversial First Couple since Franklin and Eleanor Roosevelt.

Maney’s book is, in sum, the most succinct and up-to-date study of the Clinton presidency, invaluable not merely for understanding a transformative era in American history, but presidential, national, and global politics today. 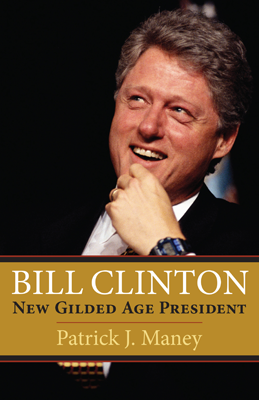