Seán Lemass is generally regarded as the man most responsible for the modernisation of Irish society. This book considers how Lemass evolved as a key figure in Fianna Fail governments and later to become one of the most influential leaders of twentieth-century Ireland. Professor Savage argues that by the time Lemass emerged out of the shadow of Eamon de Valera he had learned valuable lessons concerning the limitations of political power. By 1959 Lemass understood that principle sometimes had to be compromised to ensure the maintenance of political power.

This short biography uses a wide array of resources to consider the policies he initiated during his long political career. It also addresses the relationships he developed with a number of institutions including the Government of Northern Ireland and the Catholic Church. This study considers how Lemass grappled with four critical issues during his tenure as Taoiseach. It explores how he tried to advance Ireland’s moribund economy, and improve problematic relations with Northern Ireland, the British Government and the Catholic Church. What emerges is a portrait of a shrewd politician intent on moving Ireland forward as a modern, self-confident European nation. 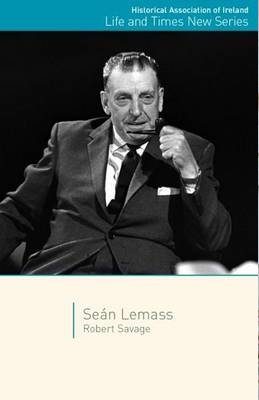