For many goods and services such as electricity, health care, cellular phone service, debit-card transactions, or those sold with loyalty discounts, the price of the next unit of service depends on past usage. As a result, consumers who are inattentive to their past usage but are aware of contract terms may remain uncertain about the price of the next unit. The theoretical paper develops a model of inattentive consumption, derives equilibrium pricing when consumers are inattentive, and evaluates bill-shock regulation requiring firms to disclose information that substitutes for attention. The analysis predicts that bill-shock regulation might be good for consumers or might be bad for consumers, depending on market conditions relating to consumer sophistication, consumer heterogeneity, and the level of competition. It remains an empirical question as to whether bill-shock regulation will be beneficial in any particular market. For that reason, the empirical paper focuses on the market for cellular phone service. Following FCC pressure to end bill shock, cellular carriers now alert customers when they exceed usage allowances. The paper estimates a model of plan choice, usage, and learning using a 2002-2004 panel of cellular bills. Accounting for firm price adjustment, simulations predict that implementing alerts in 2002-2004 would have lowered average annual consumer welfare by $33. We show that consumers are inattentive to past usage, meaning that bill-shock alerts are informative. Additionally, our estimates imply that consumers are overconfident, underestimating the variance of future calling. Overconfidence costs consumers $76 annually at 2002-2004 prices. Absent overconfidence, alerts would have little to no effect. Nevertheless, bill-shock regulation may be more beneficial in other markets. For instance, results in the theory paper are suggestive that requiring banks to issue low-balance alerts to checking account holders may not only reduce overdraft fees but also benefit consumers even after other fee changes are taken into account. 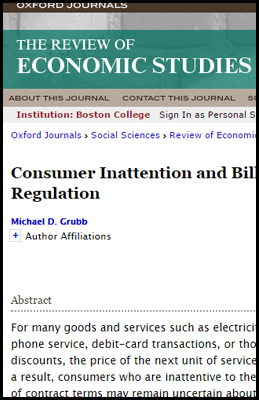