Losing Touch with Nature: Literature and the New Science in Sixteenth-Century England

During the scientific revolution, the dominant Aristotelian picture of nature, which cohered closely with common sense and ordinary perceptual experience, was completely overthrown. Although we now take for granted the ideas that the earth revolves around the sun and that seemingly solid matter is composed of tiny particles, these concepts seemed equally counterintuitive, anxiety provoking, and at odds with our ancestors’ embodied experience of the world. In Losing Touch with Nature, Mary Thomas Crane examines the complex way that the new science’s threat to intuitive Aristotelian notions of the natural world was treated and reflected in the work of Edmund Spenser, Christopher Marlowe, William Shakespeare, and other early modern writers.

Crane breaks new ground by arguing that sixteenth-century ideas about the universe were actually much more sophisticated, rational, and observation-based than many literary critics have assumed. The earliest stages of the scientific revolution in England were most powerfully experienced as a divergence of intuitive science from official science, causing a schism between embodied human experience of the world and learned explanations of how the world works. This fascinating book traces the growing awareness of that epistemological gap through textbooks and natural philosophy treatises to canonical poetry and plays, presciently registering and exploring the magnitude of the human loss that accompanied the beginnings of modern science. 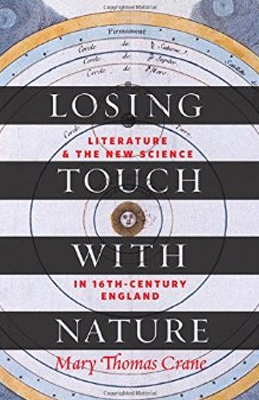