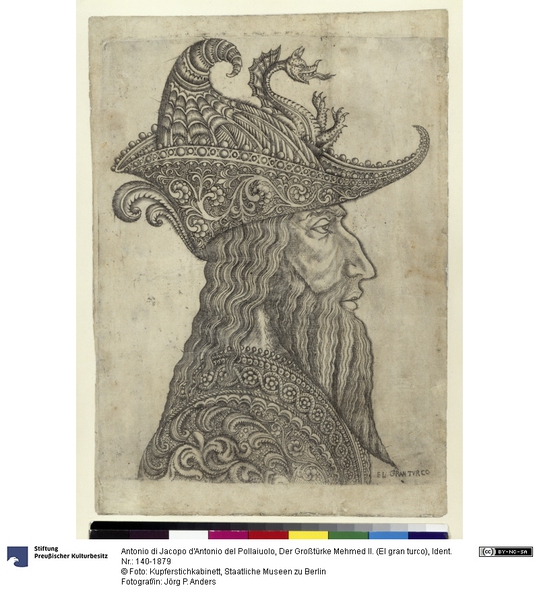 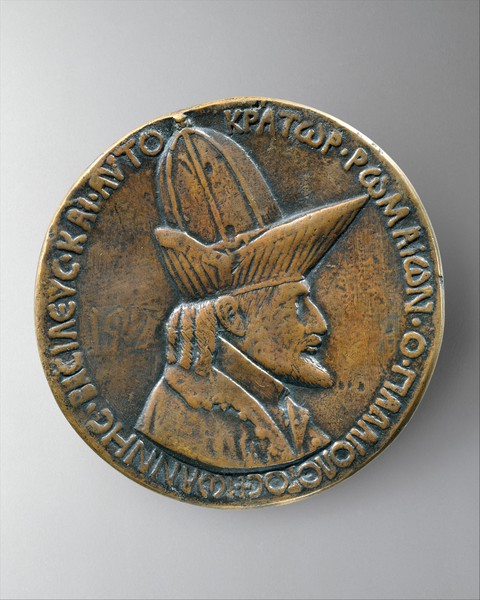 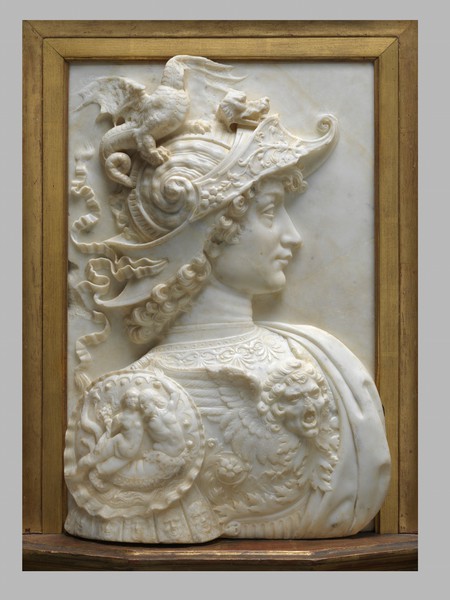 In this Exhibit we delve more deeply into cultural relations between Venice and Ottoman Constantinople, focusing on Sultan Mehmed II.

Western rulers were fascinated by Mehmed II. The engraving of Mehmed II on the left, c. 1470, demonstrates this interest before any western artist had gone to Mehmed's court. The portrait was in part based on the earlier bronze Medal of Emperor John VIII Paleologos, 1438-39, by the artist Pisanello. John VIII Paleologos was the Byzantine emperor, and here his general features are transposed to his Ottoman conquerer, in the absence of a portrait from life. However, Mehmed's nose and beard are distinct, possibly in response to verbal descriptions. His costume, the richly patterned garment edged in pearls and his hat, is pure fantasy. The elaborate helmet topped by a fanciful shell from which a dragon springs is based on western parade armor. The dragon symbolizes triumph over evil and attests to Mehmet’s role as a warrior.

Mehmed was similarly fascinated with European culture, especially the art of portraiture. For 20 years, he sought to bring portrait painters and medallic sculptors to Istanbul from Rimini, Naples, Ragusa, and Venice. He wanted portraits of himself to use as diplomatic gifts. Independent portraits were an art form that developed in Northern Europe and Italy in the mid-15th, in part in response to ancient portraiture. It was fashionable to have one's portrait painted, and some were circulated to disseminate the features of the sitters.

Who was MEHMED II?

He was an enlightened ruler with a lifelong ambition to revive the ancient city of Constantinople’s ruinous state. We know much about his ambitions from European historians and travellers.

Mehmed was born in Edirne (Adrianople), the then capital of the Ottoman empire. He spent his youth in the Anatolian provinces and quickly grew to prominence. He aggressively expanded the Ottoman Empire, built up the navy, and in 1453 conquered Constantinople. His imperial ambitions were modeled on the Byzantine Empire and Alexander the Great. They were back up by his skills as a warrior and a connoisseur of artillery and siege engines. He created a highly centralized regime of which he was the all-powerful ruler.

Mehmed moved the capital from Edirne to Constantinople (or Istanbul, which was the popular name from the Greek "eis tin polin" = “to the city”). It was an exciting and strategic location at the juncture of two continents and two seas (Black and Mediterranean). As a site of encounter, it fit Mehmed's personality. He knew Arabic, Greek, and Latin, and was interested in classical culture, employing a Greek counselor in his court. His library had some western manuscripts and printed books, a large collection of exquisite Arabic and Persian books, one Qu’ran, and many books of heroic fiction. At his court in Constantinople he was a great patron of the arts. He retained many Persians whose manuscripts and portraiture art he liked. He seems to have respected Byzantine art even though it was Christian; chroniclers record his intervention to preserve some Byzantine mosaics in Hagia Sofia, and he systematically collected Christian relics.

Mehmed envisioned his empire as mediating between multiple worlds at the crossroads of Europe and Asia. His empire combined Perso-Islamic, Turco-Mongol, and Roman-Byzantine traditions. He encouraged Christians and Jews to populate Constantinople. He created a polyglot ruling elite of Byzantine-Serbs, Greeks (some the descendants of the Byzantine emperor, Italo-Greeks, princes of the defeated lands of Trebizond, Morea, and Bosnia.

Mehmed populated his capital with multiethnic and multiconfessional communities to promote economic growth, trade, and diplomacy. The city was described as having mosques, churches and synagogues populated by peoples with their own languages and customs. Venetian and other Italian merchants negotiated at the Ottoman court, exchanging gifts and forging commercial relations.

Mehmed's intentional hybridity created visual cosmopolitanism, which combined diverse artistic traditions in fashioning his public persona and self-image upon the reconstructed stage of new capital. His architectural commissions integrated Ottoman with Byzantine, Italian Renaissance, and Timurid-Turkmen elements. To transform the city back into its powerful and wealthy ancient character, he repaired streets and aqueducts, rebuilt the harbor (where resident European communities lived), built a new fortress and two market halls. Most importantly, from 1459-78 he focused on two architectural commissins, a mosque complex and  Topkapi Palace. They symbolized the refounding of Constantinople as a religious and secular city.

According to a contemporary source, Topkapi was “a palace that should outshine all and be more marvelous than the preceding palaces in looks, size, cost and gracefulness.” (Kritoboulos)

It was located next to the Hagia Sophia, a Byzantine church, and abutted the evocative ruins of Constantine’s Great Palace with a hippodrome. As we see in the left photo, it took over a terraced promontory on the tip of the peninsula where the Byzantium ancient acropolis had stood. Here is the conjunction of the Bosporus with the Sea of Marmara. It was a good location because it was easily defensible, highly visible, and at the symbolic center of the ancient city.

From 1463 until the 19th century, it was the residence of the sultan and the administrative center of the Ottoman Empire, with a vast conglomeration of buildings.

The plan is a series of courts, beginning with the outer park and followed by courts within the walls, that lead in a linear progression to the audience throne-room at the end.

The Treasury (left) comprising three interior courtyards was built on the  uppermost terrace of the acropolis. The loggia facing the courtyard, seen here on the left part of the photo, is built in the Roman style that was revived in the Italian Renaissance, with broad round-headed arches on ancient columns. The Treasury housed a universal collection, from Byzantine relics to Mehmed's multilingual library.

Several of the buildings provided magnificent views and could be seen from the water, allowing visitors to admire the palace complex.