Many houses were built according to the legend of the "First law of the republic," which states that houses "should be equal, alike, or of similar size." (Francesco Sansovino, 1581).

It is impossible to date precisely the oldest secular buildings in the city. Early houses were built of wood, destroyed by fires, and then often rebuilt in wood again, with the cycle of fire sometimes repeating itself. Around 1100 wealthier families began to erect more durable buildings constructed of brick with stone detailing. 1200 marks the construction date of the earlierst surviving houses in Venice, which coincides with the economic prosperity that followed the Fourth Crusade. Venetians began to distinguish themselves through palace building while still showing restraint.

The terminology for houses is influenced by the myth of equality. The term "palace" was only used for the residence of the doge, the patriarch of Grado, and the bishop. All other residences were called a house, in Italian and Venetian dialect, casa, ca', and ca' grande. Venetian house typology was constant because it worked structurally and technologically. Building techniques thus remained the same, for the most part, until the end of Republic (some 600 years later).

Fondaco dei Turchi (Arabic funduq = trading post)
The Fondaco dei Turchi was built c. 1200 as a residence for the Pesaro family. In 1621, it became the Fondaco dei Turchi, the trading center for Turkish merchants in Venice. In the 19th century the façade was completely refaced and the interior was rebuilt with a new large central court. The tower projections and crenellations are part of the 19th-century renovation.
The exact form of Veneto-Byzantine houses is debatable because of later renovations. They have little in common with the stone towers of other Italian cities because the social structure of Venice did not create a need for a stronghold.

From this Fondaco dei Turchi we can surmise that the Veneto-Byzantine façade was two stories high. The construction of taller buildings was hazardous because they lacked local stone and firm foundations. Later some tall houses were built out of necessity, as in the Ghetto, or as a display of wealth (see the Palazzo Cornaro, 16th century). The façade was open, with a loggia populated by narrow, round-headed arches. The function of these spaces was both residential and commercial. 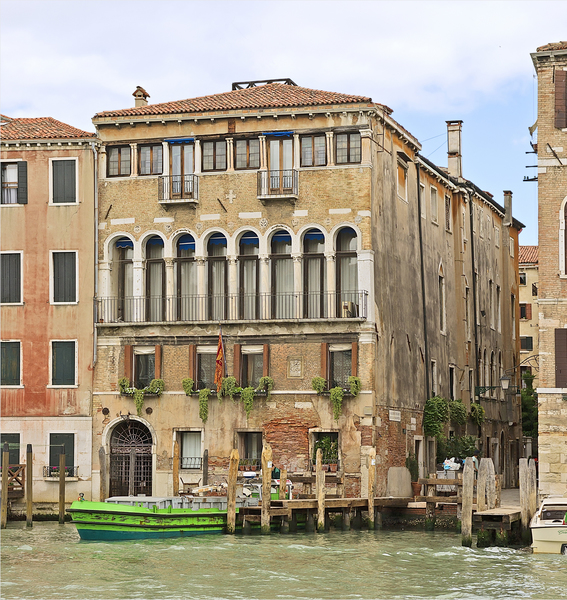 It should be known that the Palazzo Donà della Madonetta underwent a massive transformation in the 13th century. The piano nobile (main floor) arcade probably reflects the original design. It has typical Veneto-Byzantine stilted arches, inlaid with Byzantine reliefs.

In the 19th century, both Ca' Loredan and Ca' Farsetti were enlarged with upper floors, but the first two stories are original and reflect the Veneto-Byzantine style. Houses on the Grand Canal, like these two, encouraged openness and display, whereas houses away from the main canals looked more like mainland ones with greater wall survace. They had a ground floor opening to the street, with shop windows and doors. Their function and appearance was more modest than their counterparts on the larger canals.

The casa fondaco that combined a merchant warehouse with living space was the model for many Venetian houses. The two-story arcade on the Grand Canal has tall stilted arches and slender columns. It creates the visual effect of lightness and allows in natural light, without weakening the structure. Merchandise was loaded and unloaded at the ground-floor portico. The main entrance arch is slightly wider. The façade includes spoglia in the form of stone medallions. Stonemasons from Lombardy and the Veneto carved exquisite capitals and moldings to harmonize with the spoglia. The casa fondaco has a hipped roof. The living quarters were on the second floor.

Both of these houses exemplify the characteristics of the typical casa fondaco. The site is deep and narrow  due to the crowded city. The house has a tripartite scheme created by 4 parallel spine walls. They are the load bearers. The facade is non-load bearing so it could be perforated with windows. The tripartite scheme has three parallel wings perpendicular to the façade. The central wing is open: on the ground floor it is called the androne (entry space), and on the second floor it is called the portego (grand salon). The side wings have small rooms. At the rear is a small courtyard, typically with a wellhead, and the land entrance.

The casa fondaco suited the needs of Venetian merchants and the environment!